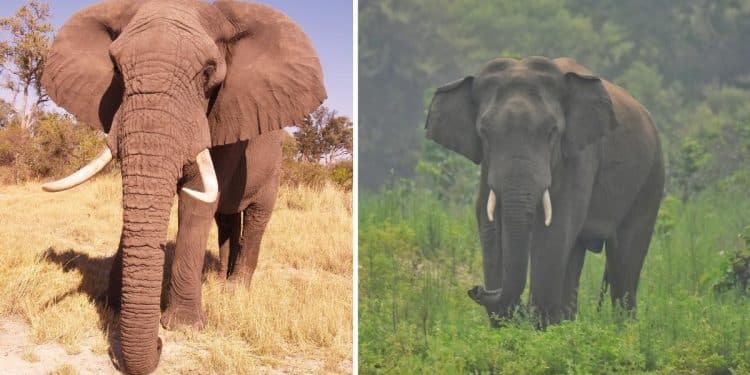 There are two types of elephant species: the African elephant (Loxodonta africana) and the Asian elephant (Elephas maximus). Both share similar traits such as body size, shape, and behavior.  Although they look similar, what are the differences between them?

The differences between African elephant vs Asian elephant?

Once common throughout Africa and Asia, elephant populations have experienced significant declines over the last century. The greatest threat to African elephants is poaching for the illegal ivory trade. In Thailand, the illegal trade in live elephants and ivory still flourishes. Asian elephant populations are most at risk from habitat loss and resulting human-elephant conflict.

Elephants are the largest land mammals on earth and have distinctly massive bodies, large ears, and long trunks. They use their trunks to pick up objects, trumpet warnings, greet other elephants, or suck up water for drinking or bathing, among other uses. Both male and female African elephants grow tusks and each individual can either be left- or right-tusked, and the one they use more is usually smaller because of wear and tear.

Elephant tusks serve many purposes. These extended teeth can be used to protect the elephant’s trunk, lift and move objects, gather food, and strip bark from trees. They can also be used for defense. During times of drought, elephants even use their tusks to dig holes to find water underground.

Asian elephants differ in several ways from their African relatives, with more than 10 distinct physical differences between them.

Led by a matriarch, elephants are organized into complex social structures of females and calves, while male elephants tend to live in isolation or in small bachelor groups. A single calf is born to a female once every four to five years and after a gestation period of 22 months the longest of any mammal. Calves are cared for by the entire herd of related females.

When habitat conditions are favorable, female elephants may give birth to a calf every 2.5-4 years.

Female calves may stay with their maternal herd for the rest of their lives, while males leave the herd as they reach puberty. Forest elephants’ social groups differ slightly and may be comprised of only an adult female and her offspring. However, they may congregate in larger groups in forest clearings where resources are more abundant.

A 2001 study in the journal Science included the first DNA evidence that the savanna and forest elephants are separate species But then other studies showed that at least a small number of savanna elephants shared mitochondrial DNA genetic information passed down from only mothers with forest elephants.

All elephants have 5 toes on each foot, but not every toe has a nail. The number of toenails varies between the African bush elephant, African forest elephant, and Asian elephant:

African forest elephants: 5 toenails on the front feet and 4 on the back feet

African bush elephants: 4 toenails on the front feet and 3 on the back feet

Asian elephants: 5 toenails on the front feet and 4 on the back feet

There are also a number of physical differences between the Asian and African elephants you’d be unlikely to pick up from a game drive sighting.

Elephant ears radiate heat to help keep these large animals cool, but sometimes the African heat is too much. Elephants are fond of water and enjoy showering by sucking water into their trunks and spraying it all over themselves. Afterward, they often spray their skin with a protective coating of dust.

An elephant’s trunk is actually a long nose used for smelling, breathing, trumpeting, drinking, and also for grabbing things—especially a potential meal. The trunk alone contains about 40,000 muscles. African elephants have two fingerlike features on the end of their trunk that they can use to grab small items. (Asian elephants have just one.)

Both male and female African elephants have tusks, which are continuously growing teeth. Savanna elephants have curving tusks, while the tusks of forest elephants are straight. They use these tusks to dig for food and water and strip bark from trees. Males, whose tusks tend to be larger than females, also use their tusks to battle one another.

The number of ribs an individual elephant has varies from animal to animal, but African elephants tend to have more ribs than the Asian species, with up to 21 pairs of ribs vs the Asian elephant’s average of 20 pairs of ribs.

There is no overlap in the ranges of African and Asian elephants, so they’re never found together in the wild.

Asian elephants live in forested areas across Southern Asia – from Nepal, through India, and across Sri Lanka – and throughout Southeast Asia, including Myanmar, Thailand, Malaysia, Laos, and Cambodia.

African elephants range across the rainforests of West and Central Africa, and through the savannas and deserts of Africa. The most northern area of the African elephant’s range is the Sahel area of Mali where a small, nomadic herd of Mali elephants perform a circular annual migration in search of water.

Elephants eat roots, grasses, fruit, and bark. An adult elephant can consume up to 300 pounds of food in a single day. These hungry animals do not sleep much, roaming great distances while foraging for the large quantities of food that they require to sustain their massive bodies.

Both species of elephants eat a wide variety of plant matter found in their ranges, but there are differences in their diets.

In theory, elephants are among the longest-living animals and live longer than any other land mammal aside from humans. Due to their size and physiology, African and Asian elephants have different expected lifespans in the wild.

However, this lifespan may not always apply in captivity. Elephants kept in zoos often live far beyond their natural lifespan due to poor health conditions and lack of social interaction.

Their populations declined by 62% between 2002-2011 and they have lost 30% of their geographical range, with African savanna elephants declining by 30% between 2007-2014. This dramatic decline has continued and even accelerated with cumulative losses of up to 90% in some landscapes between 2011 and 2015.

Today, the greatest threat to African elephants is wildlife crime, primarily poaching for the illegal ivory trade, while the greatest threat to Asian elephants is habitat loss, which results in human-elephant conflict. WWF has advocated for an end to commercial elephant ivory sales in the US and other major markets like China, Thailand, and Hong Kong as the most effective and efficient solution to end this illegal ivory trade.

Elephants are also losing their habitats and ancient migratory routes due to expanding human settlements into their habitat, agricultural development, and the construction of infrastructures such as roads, canals, and fences that fragment their habitat.

As a result, human-elephant conflict is rising as more and more elephants come into close contact with humans. This often leads to elephants destroying crops and property, as well as occasional human casualties. These negative interactions can result in the retaliatory killing of elephants.

In 1989, the Convention on International Trade in Endangered Species of Wild Fauna and Flora (CITES) a global agreement among governments to regulate or ban international trade in species under threat banned the international commercial trade in elephant ivory.

Poaching rates dropped following the action but began to surge again around 2010, due to renewed consumer interest in purchasing elephant ivory, largely in Asia. After campaigns by WWF and other conservation groups, governments in problematic ivory markets like Hong Kong, Thailand, the US, and the UK were pushed to take action to clamp down on illegal and unregulated domestic trade that was fueling the poaching.

WWF helps establish new protected areas within elephant ranges and improve management effectiveness within existing protected areas. They support efforts to determine the population status of elephants in sites across Africa and Asia to make our conservation projects more effective.

The results of surveys undertaken by the Monitoring the Illegal Killing of Elephants (MIKE) program an international collaboration that measures the levels, trends, and causes of elephant mortality provide important crucial information on elephant strongholds and poaching hotspots, thereby forming a base to support international decision-making related to conservation of elephants in Asia and Africa.

Unlike their Asian and African elephant counterparts in West and Central Africa, as well as in a couple of Eastern African countries such as Tanzania and Mozambique, which all have experienced dramatic decreases in their populations, some major populations in Namibia, South Africa, and Zimbabwe have remained stable or are increasing.

Human-elephant conflict leads not only to negative interactions and loss of income, property, and lives but also reduces community tolerance for conserving elephants. Addressing complex issues like human-wildlife conflict requires approaches that not only reduce the immediate impacts of negative interactions but also address the drivers and root causes of the conflict.

WWF works with various stakeholders particularly wildlife managers and communities to incorporate tools and technologies, such as electric fencing, deterrents, and other tools, to prevent potentially harmful encounters. They also engage in efforts to educate communities that lead to behavior change that will minimize negative impacts.

They help community response teams to respond to instances of human-elephant conflict and work with communities to develop alternative livelihood opportunities to help minimize economic impacts from crop loss.

To reduce human-wildlife conflict in the long term, WWF works with governments and other stakeholders to address the root causes of human-elephant conflicts, such as habitat loss and fragmentation, and unplanned development.