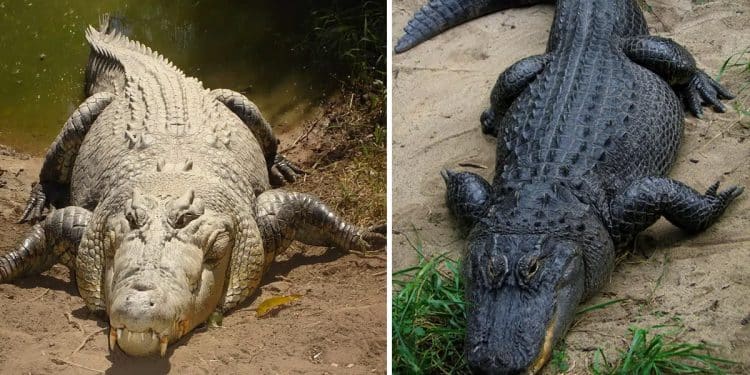 What’s the difference between an alligator and a crocodile?

Another difference is that alligators have webbing between their toes, while crocodiles do not. This helps alligators swim faster than crocodiles.

Alligators can grow up to 15 feet long and weigh over 1000 pounds. The largest alligator ever recorded was 19 feet long! Crocodiles can also grow to be quite large, with the largest recorded at 23 feet long.

However, most alligators and crocodiles are much smaller than this. The average alligator is about 11 feet long, while the average crocodile is only about 15 feet long.

This difference is due to the different shapes of their skulls. Alligators have short and wide skulls, while crocodiles have long and narrow skulls. This gives alligators more surface area to apply pressure with their jaw muscles, making their bite much stronger.

Alligators also have a broader snout than crocodiles, and their teeth are hidden when their mouth is closed (you can only see the teeth on the bottom jaw).

Crocodiles, on the other hand, have a narrower snout, and you can always see their teeth even when their mouth is shut. Additionally, alligator skin is rough whereas crocodile skin is smooth.

It can be difficult to tell alligators and crocodiles apart from a distance. However, if you take a closer look, there are several key differences that can help you identify which reptile you’re looking at. So the next time you’re out on a nature walk, see if you can spot an alligator or crocodile!

Alligators tend to live in freshwater environments like rivers and lakes, while crocodiles are found mostly in tropical regions worldwide, including parts of Africa, Asia, Australia, and the Americas. They prefer saltwater habitats such as estuaries and mangrove swamps.

When the weather becomes too severe, alligators are known to dig “gator holes” in the dirt or mud. These tunnels help them defend against extreme temperature fluctuations (hot and cold).

Crocodiles also tend to live much longer than alligators, with an average lifespan of 70 years compared to the alligator’s 50 years.

Crocodiles and alligators are both carnivores with sluggish metabolisms. They swallow prey whole since they can’t chew their food. Alligators eat everything from birds and fish to other reptiles, small mammals, and even fruit.

These reptiles are classified as “apex predators.” and have no natural predators. Nonetheless, crocodiles aren’t immune to being hunted. Evidence of this can be seen in big cats such as tigers, lions, and jaguars, who have been documented hunting and consuming crocodiles when the urge (and hunger) strikes.

Alligator vs. crocodile – Socialization and Play

Crocodiles are known for their sociability. While crocodiles are typically thought of as solitary animals, they will work together to hunt and raise their youngsters; they are even known to form long-term relationships with one another!

Surprisingly, crocodiles have their own social hierarchy based on size and stature (the biggest one wins!), with the largest getting the best place to soak up the sun (i.e., a “basking site”) to help keep their body temperature cool and others getting preference in large group feedings.

Crocodiles are also known to play together like other animals and humans (in captivity). Despite their love of fun, crocodiles are still aggressive creatures that will attack and kill people if provoked or threatened.

Alligators are considered less social than their reptilian cousins, though they are known to spend time together while basking or swimming.

A congregation is a group of alligators that includes both smaller and larger individuals, rather than bigger ones who are more territorial and solitary.

There are some clear differences between alligators and crocodiles when it comes to mating.

Crocodiles are polygynous, meaning that they mate with multiple females. A male crocodile will carefully select a nest site and lure suitable females thereby bellowing and displaying his bright colors. He will then mate with all the receptive females in the area.

On the other hand, alligators are monogamous, forming long-term pair bonds. After selecting a nest site, the male alligator will call out to any potential mates in the area. If he receives no response, he will move on. However, if he does find a suitable mate, they will stay together for several years.

Which Is More Dangerous?

Crocodiles are often considered more aggressive than alligators, and while both reptiles can be dangerous, there are some key differences between the two.

While alligators are certainly hazardous, they are less aggressive than crocodiles. If a human approaches an alligator, it will typically attempt to flee toward the nearest water.

A wild alligator would attack a person if they are startled, provoked, or defending their youngsters.

Humans are instinctively frightened of alligators, but exposure to them can reduce some of their terror. Feeding them in the wild is almost always a poor idea since they will lose some of their fear and see humans as a food source. They might mistake little children and pet dogs for prey.

On the other hand, Crocodiles are much more bad-tempered and far more likely to attack humans, even unprovoked.

Australian saltwater crocodiles are generally considered the most dangerous in the world, followed by Nile crocodiles.

The American crocodile (Crocodylus acutus) is the most aggressive and dangerous of all living species, with one recorded attack on a human. On the other hand, the American alligator (Alligator mississipiensis) is one of the more docile species you’ll ever encounter; they seldom attack humans. In the United States, an Alligator is more likely to attack than a crocodile, although such incidents are extremely rare.

It really depends on the situation you’re in as to which reptile is more dangerous. But, generally speaking, crocodiles are more dangerous than alligators. So be careful out there! And watch your step around both of these reptiles – you never know when one might attack!

Thanks for reading! I hope this helped clear up some of the confusion between alligators and crocodiles. Stay safe!