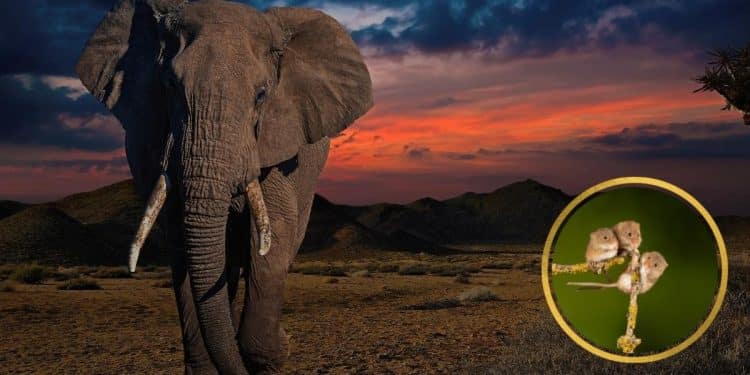 Are elephants afraid of mice?

Are elephants afraid of mice? Why would the largest mammal on land be afraid of one of the smallest?

Elephants are well known for their size, strength, grace, and intelligence. They are also famous for being the largest land animal. Their brains are larger than humans. But why do they fear mice? And what’s causing them to retreat from these tiny animals? This question has puzzled scientists for generations.

There are over 4000 species of mammals worldwide. The elephant is the largest land mammal, standing at 7m tall. Its brain weighs around 2kg and is larger than that of a human (1.3kg). Elephants live in large groups called herds, led by the oldest female.

Elephants are considered intelligent creatures. In fact, elephants rank higher than dogs, cats, horses, apes, monkeys, and other primates in terms of cognitive ability. They understand basic commands such as ‘sit’ or ‘walk’. But why do elephants run away when confronted with mice?

Is it really true that elephants are afraid of mice?

To learn more about why elephants are afraid of mice and to debunk the myths surrounding the two animals’ behavior, read on. The reality about how and why elephants react to mice the way they do truly is amusing, if not fascinating.

The myths about elephants and mice

If you think there’s no way a huge elephant could fear a mouse, you’d be correct. From the movie “Dumbo” to Saturday morning cartoons, the image of an elephant cowering from a minuscule mouse is pretty well established. But the elephant’s fear has more to do with the element of surprise than the mouse itself.

Theories abound that elephants are afraid of mice because the tiny creatures nibble on their feet or can climb up into their trunks. However, there’s no evidence to back up either of those claims.

The mouse-in-the-trunk myth, for example, seems to date back centuries to the ancient Greeks, who reportedly told fables about a mouse that climbed into an elephant’s trunk and drove it crazy. Some have said the claim started with Pliny the Elder in A.D. 77, as reported by Discovery’s Myth Busters Apparently, in the late 1600s, an Irish physician named Allen Moulin was trying to figure out why such big pachyderms might quiver at the sight of such a small rodent as a mouse, according to Christopher Plumb’s “The Georgian Menagerie: Exotic Animals in Eighteenth-Century London” (I. B. Tauris, 2015).

Moulin reasoned that since elephants had no epiglottis, the flap of cartilage that covers the opening to the windpipe when swallowing the giant creatures could be “worried” that a mouse might crawl up their trunk and suffocate them, Plumb wrote. “This seemed reasonable since the keeper [Moulin] had seen his elephant sleep with his trunk close to the ground so that only air might go up it,” Plumb, who received his doctoral degree from the University of Manchester, wrote in the book. However, as biologists today know, elephants are equipped with that fleshy windpipe cover.

“I think the myth arose by the idea of the mouse crawling up the elephant’s trunk and nostrils but that is absurd because the elephant could easily simply blow and eject the mouse,” said elephant expert Richard Lair, who has researched elephants for 30 years, published multiple studies on their behavior and is an international adviser to the Thai Elephant Conservation Center. “And that’s in the very unlikely case that the mouse could [make it up the elephant’s nostrils] anyway.” It’s more likely that elephants, which have relatively poor eyesight, simply become startled when mice dart past.

Are elephants afraid of mice?

Even though myths about elephants being afraid of mice have been around for thousands of years, is the myth true? To some degree, it is true, although the explanations behind the myth are wrong.

On the one hand, it is true that mice often scare elephants. It is very common for an elephant to become startled whenever a mouse runs by its feet. On the other hand, elephants are not scared of mice out of fear of the little rodent crawling up its trunk and suffocating it.

On the contrary, most scientists today believe that elephants are afraid of mice simply because they have poor eyesight and get startled whenever a little mouse runs by. If any other small animal were to run by an elephant’s foot unexpectedly, the elephant would likely be scared.

Many studies and elephant experts have seen with their own eyes how elephants respond to mice. They report that elephants certainly get startled by mice but being afraid isn’t the right word. The elephants are surprised because they did not see the mouse coming.

In fact, there have been some stories about elephant trainers holding mice in their hands. When this happens, the elephant doesn’t really respond to the mouse. It’s only when the mouse runs by its feet unexpectedly that the elephant gets startled, proving that elephants are frightened by mice.

MythBusters has unfolded the mystery behind elephants fearing mice

You might have already heard about MythBusters, a popular show telecasted on the Discovery Channel. The show is hosted by Jayme Hyneman and Adam Savage. In one of their episodes, they performed an experiment where they hid a white mouse under a dung heap.

The elephants noticed the mouse, startled a little bit, and took a step away from it. The hosts were shocked to see this behavior of the elephants. However, let’s not make any conclusion based on only one experiment. Here’s another experiment performed in another popular show – 20/20.

Just like MythBusters, another popular show, 20/20, performed their own experiment to discover if elephants are terrified of mice or if it’s just a myth. On the show, 20/20, Barnum & Bailey Circus and Ringling Bros were invited. So here’s how the experiment went:

Troy Metzler, the trailer of the elephants, asked the host to hold a white house in his hands. Then the host walked close to an elephant and showed the white mouse. The host then took the mouse around and showed it to other elephants.

What were the results? You will be surprised to know what happened. The elephants did not even seem bothered at all after seeing the mouse. They acted normal – neither anxious nor surprised. Does it mean the elephants are not afraid of mice? Why hadn’t the elephants made any anxious moves like those in the MythBuster show did?

Are other animals afraid of mice?

In fact, nearly all mammals are programmed to jump back whenever startled. That is why humans, elephants, and cats alike will jump when something unexpected crosses their paths.

Think back to your own experiences. Most likely, you have been startled by a mouse or another creepy crawly running past you. It’s not that you were afraid of the mouse hurting you as much as you were startled by its small body. Elephants and other animals react in the same way.

In some ways, huge elephants are afraid of mice, but it is likely that elephants aren’t actually scared of mice; they are just startled by their sudden movements through fear that it might be something larger and more dangerous than a tiny mouse.

Elephants don’t typically leap onto small objects at the sight of a mouse. They are physiologically incapable of leaping at all, research has provided a possible reason for elephants’ supposed fear of mice.

An elephant’s eyes are located on its head in approximately the same position as a human’s ears — add this to the elephant’s large body, (relatively) poor eyesight, sensitive hearing, and an acute sense of smell, and what the elephant sees turns from a small, furry rodent into a small, barely-visible, blurry and mostly-unidentifiable squeaking blob somewhere near its feet.

Josh Plotnik, a researcher of elephant behavior and intelligence (which sounds like an amazing job) said that elephants have quite poor eyesight and, therefore, may just be startled when a small animal such as a mouse scurries past their feet.

Just as you would be surprised if a mouse suddenly ran over your foot, so are elephants. At the same time, you would likely be bored if someone carried a mouse to you. Elephants are the same way. They are just startled when a creepy crawling thing runs by!

So the conclusion is – yes and no.

Yes, elephants are afraid of mice. And no, it’s not always when they get scared of them. Based on what Josh Plotnik said, we can only come to one verdict: elephants don’t specifically fear mice. However, there’s still a need for more researchers to study this topic in-depth and discover the best possible conclusion.

The next time someone asks you – Are elephants terrified of mice, don’t just pass on the same cartoon and imaginary fables that were being fed to you. Share the right information, the truth you learned today.

You may even share this blog with them. Tell them to read this blog and discover the right answer to their questions.