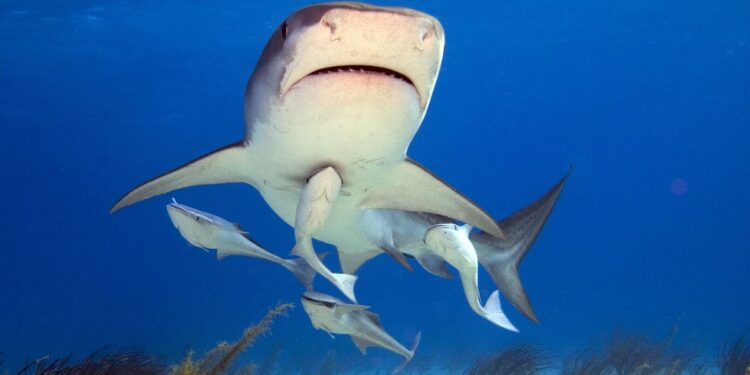 The answer is yes. There are a few species of sharks that can be found in the Mediterranean sea. It is important to note that shark populations have declined due to overfishing, pollution, and other negative impacts. As a result, sightings are not as common as they once were.

Despite their decline in the Mediterranean sea, sharks still play an essential role in this region’s ecosystem. Sharks help maintain the balance between fish populations and keep other marine species from becoming too abundant. Therefore, we must continue to monitor and protect these species to ensure a healthy Mediterranean sea ecosystem.

How many types of sharks are in the Mediterranean sea?

While most sharks found in the Mediterranean are not dangerous to humans, there are still 15 species that can be problematic for swimmers. Still, most of these hazardous sharks are found in waters that tourists will never encounter.

What are the most common types of sharks in the Mediterranean Sea?

Although there are 47 species of sharks in the Mediterranean Sea, we’re only going to focus on some of the most common and interesting ones.

Great white sharks are considered one of the most feared predators in the Mediterranean Sea. They measure about 3.4-4.9 m and weigh about 680 – 1.100 kg. They usually swim alone but have occasionally been seen in small groups. Great whites are mainly found in the open sea but can sometimes be spotted near the coasts.

The blue shark is a long-distance swimmer and can be found in almost all parts of the Mediterranean Sea, along the coast of France, Italy, and Greece. It is a slender species, measuring about 1.8 – 2.4 meters in length and weighing up to 52kg. Despite its size, the blue shark is a timid species that poses no threat to humans.

Hammerhead sharks are found in the Mediterranean Sea’s tropical and temperate marine waters. On average, hammerhead sharks grow 13.1 feet (4 m) long and 500 pounds (230 kg). The longest great hammerhead shark on record was 20 feet (6.1 m), while the heaviest one ever documented weighed 991 pounds (450 kg).

They are an aggressive and true apex predator. While they don’t look for human confrontations, they will attack if provoked. You’ll find three different hammerhead shark species in the Mediterranean sea, two species are actively endangered, and the third is vulnerable due largely to the demand for their large fins in shark fin soup.

Grey nurse sharks live up to 30 years and can grow up to 3.2 meters in length. They are endangered and mostly active at night.

They can be found on shallow, sandy bottoms or rocky caves and are close to inshore rocky reefs or islands in the Mediterranean Sea, where they feed mainly on fish and crustaceans. Despite their menacing appearance, grey nurse sharks are not dangerous to humans.

Smalltooth sand tiger sharks are medium-sized species of shark that can reach lengths of up to 4m and a weight of 289 kg. They are most commonly found in the shallow of Mediterranean Sea or near the bottom of the continental.

They mainly eat squid, cartilaginous fishes, such as rays and chimeras, and crustaceans. Despite their large size, small-tooth sand tiger sharks are not dangerous to humans.

Blacktip sharks are common species of shark found in the Mediterranean Sea. They can reach lengths of up to 1.5 m and weigh up to 68-122 kg. The name ‘blacktip’ is derived from the black edge on their fins and (rarely) tails.

They mainly feed on benthic fish, rays, and cephalopods. They prefer shallow waters to deep depths, so they are often found near coral reefs, lagoons, and bays.

Blacktip sharks are meek creatures that would rather run than show aggression. They aren’t a threat to humans.

Spinner sharks are one of the more common species on the Southern side of the Mediterranean Sea. They can grow up to 3 m and weigh up to 56 kg. Spinner sharks have slender bodies with black-tipped dorsal and caudal fins.

They are an active species that feed mainly on small bony fish, squid, octopus, stingrays, and cuttlefish. The creature got its name from how it twists and swims when attacking at high speeds. They are generally considered harmless to humans, though they should not be approached too closely as they can become startled and bite if provoked.

They are easy to catch and over-fished for fins and liver oil, so the species is listed as vulnerable. There are fishing bans in some areas to help the population recover.

If you’re planning a trip to the Mediterranean Sea, be aware that tiger sharks are one of the most dangerous shark species. They tend to be rare, but they have been known to swim through the Straits of Gibraltar.

They measure about 3.25 m – 4.25 m long and weigh up to 635 kg. Tiger sharks feed on bony fish, seabirds, crustaceans, small sharks, lobsters, skates, rays, turtles, and marine mammals. Given their size and power, they should be treated with caution. Although attacks on humans are rare, they can be fatal if provoked.

Catsharks are the most abundant and widely distributed family of sharks in the Mediterranean Sea. Unlike other sharks, cat sharks are small and not shaped like the stereotypical shark.

Their soft fins are set far back on their bodies, making them look more like fish. When you see one while diving, it’s a truly spectacular – and perfectly safe – sight.

They are found on the bottom of the ocean, in shallow waters, or incredibly deep habitats. Most species feed mainly on benthic organisms like crustaceans, small fish, squid, and other invertebrates.

Sandbar sharks are a large species of shark that can be commonly found in the Mediterranean Sea. They typically measure up to 2 m in length and weigh up to 90 kg. They have robust bodies and rounded snouts.

As their name suggests, sandbar sharks typically live and hunt near sandbars. They usually prefer to live near coasts by large banks of sand or mud, including islands, bays, and harbors.

The sandbar shark feeds on stingrays, shrimps, crabs, and squid. They are currently an endangered species.

Other types of sharks in the Mediterranean Sea

Here are some other common species you might find in the Mediterranean Sea:

What countries in the Mediterranean Sea have sharks?

Sharks can be found in some countries bordering the Mediterranean Sea. These include:

In recent years, several Great White sightings have been reported near Italy. However, it’s essential to remember that these reports make headlines precisely because they are so rare; according to some estimates, there have only been ten sightings in the past 30 years.

By contrast, Tiger and Blue sharks are much more common in this area. The negative press surrounding shark attacks in Italy gives the impression that the Mediterranean is a “hot zone” for such activity when this is far from the truth.

Most sharks living near the French coast are less than 2 meters long. But there are some large ones too.

Basking sharks, which can reach a length of 8 meters, are not dangerous. A small number of white sharks, mako sharks and other types of sharks are also found in the area.

The white shark is one of many species that prefers to swim in deep water, which is found far from French beaches and humans.

Although many shark species lurk near the Greek coast, they tend to stay in deeper waters farther from shore. So it’s not often that tourists see them venturing into shallower areas near popular beaches. Even so, sightings are noteworthy and newsworthy when they do occur.

Most sightings are from fishermen in deeper waters, but some tourist trips also see them. The blue shark is the most commonly seen species.

There have only been 13 shark bite incidents in 165 years in Greece, so humans and sharks get along just fine. Some people even love to see the large number of shark pups that often travel with Blue sharks.

Greece isn’t the only place with few shark sightings. Cyprus, another diving hot spot, rarely sees sharks in shallow waters; they have been known to spot in deeper water. Recent shark sightings include the Mako, Basking, and Blue sharks.

Although Turkey has a coastline in the Mediterranean Sea, very few shark sightings have been reported. In fact, since 1881, there have only been 47 recorded sightings of sharks. This is surprising, considering that millions of tourists visit Turkey every year.

Most shark sightings in Turkey are of Sand Tiger sharks and Bull sharks. However, many areas of the Turkish costs haven’t seen sharks in decades.

There are a variety of shark species that inhabit the Mediterranean Sea. While some species, such as Tiger Sharks, may pose a risk to humans, many of these sharks are generally harmless.

It is important to be aware of the presence of sharks when swimming or boating in the Mediterranean Sea and to avoid provoking or disrupting their habitat to ensure a safe experience for all.

Sharks are important to the ocean ecosystem and are worth preserving. Proper conservation measures and fishing regulations can sustain their numbers in the Mediterranean Sea. Understanding and respecting these creatures are essential to ensure a healthy ocean for future generations.