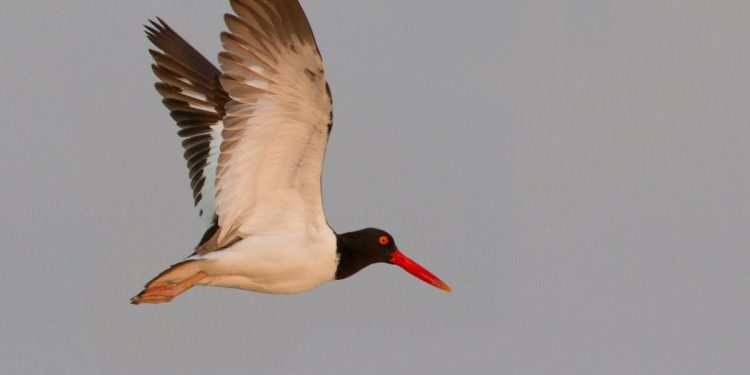 Birds have been considered dinosaurs in science, so technically, dinosaurs are not extinct. There are millions of types of birds that roam this world that exist in different colors, shapes, and sizes. The bird beak, also known as the bill or rostrum, is an anatomical structure in all kinds of birds with different colors.

Just like there are birds in all shapes and sizes, so are their beaks. They come in various colors and forms and can be one of the most unique parts of the birds.

For example, there are a variety of birds with orange beaks in different sizes that make these creatures stand out.

The colorful beaks come in handy during the breeding season. In addition, bright-colored beaks can also display the bird’s life quality overall and its dominance rank.

This article includes the name of these birds, a photo, and a description to help you identify them.

Birds With Orange Beaks In The World

There are over 6,500 known species of birds, making them one of the largest groups of animals on Earth. And each species has its own unique appearance and behaviors. The question is: What color are their beaks?

In nature, birds don’t usually wear solid colors. Instead, they blend into their surroundings using camouflage techniques. For example, many birds hide beneath leaves or branches, letting their colorful feathers blend in naturally.

But some birds have evolved to stand out from the crowd with bright orange beaks. These birds use these brightly colored beaks for various reasons, including attracting mates, defending territory, and even warning other birds away from their nests.

Here are 14 amazing birds with orange beaks that you probably didn’t know existed!

Appearance: Toco toucans (also called Common Toucans) are one of the most famous birds with an orange beak.

It’s got black plumage, a white throat, and a huge bill, which is 7 inches in length that have shades of orange and yellow with big black spots on the top.

Diet: The primary diet includes fruit easily plucked from trees. However, there are instances where it feeds on insects, frogs, small reptiles, and small birds.

Habitat: They thrive in semi-open habitats such as woodland, savannahs, and open forests.

Appearance: Atlantic Puffins have black plumage on their uppersides and white on their chest and belly.

Its face and cheeks are white, its webbed feet are orange, and the puffin’s bill is black, orange, and yellow. Because of their parrot-like beak, Atlantic puffins are also called “sea parrots.”

Diet: It is a carnivore, feeding on small fish like sand eels, herring, hake, and capelin.

Habitat: It inhabits the open oceans, ranging from the east coast of Canada and the north of the United States to the west coast of Europe, northern Russia, and Iceland.

Breeding: Its mating season is from April to August, and they appear large colonies gather on their home grounds. It mates for life, burrowing in rocky cliffs or on solid ground between rocks. The average lifespan of the bird species is 20 years in the wild.

Variable oystercatcher belongs to the family Haematopodidae. The bird species are endemic to New Zealand.

Appearance: They have a short, sturdy body with a thick neck, pink legs, black plumage, an orange eye ring, and orange-red beaks.

Breeding/nesting: They build nests of driftwood and vegetation in the sand. Females lay 2-3 eggs per breeding season. The chicks hatch within 4 weeks of the incubation period. The chicks take around 7 weeks to fledge. Both parents protect the young.

Appearance: Their name comes from the black and white stripes like zebras on the rump and upper tail. They are mostly blue-grey. Running down from the eyes is a black stripe with two white stripes between this and the beak.

They have an orange-chestnut skin pattern with white spotting on their sides. The underbodies are white with black stripes. On their chests and throats, they have white and dark stripes.

Males have a chestnut patch on their faces which allows them to be identified from females.

Habitat: They’re often seen in various habitats, such as forests, savannas, shrubs, and grasslands. They tend to be close to a water source.

Breeding/nesting: Breeding occurs throughout the year in captivity but usually happens from October to April in the wild. They nest in holes in the ground. The female lays 4-6 eggs, and both parents feed the chicks.

Appearance: They have white plumage, white wings with black wing tips, an orange-yellow bill, and legs. Males are larger than females and have a longer bill with a tuft of feathers on the back of their heads.

Diet: They feed on fish such as Cyperiniformes, common carp, Lahontan tui chubs, and shiners.

Breeding/Nesting: They breed during the winter months. They nest in colonies consisting of 3 or more pairs. They use sticks and twigs for nesting. The male builds the nest, and the female sits on it. She then lays 3-4 eggs. The chicks hatch after 5 days.

Appearance: Its head is a short crest of black and blue feathers, metallic blue upper parts, and an orangish-white chest and belly. The beak in the juvenile is black and later changes color to reddish-orange in adults. The legs are bright red.

Habitat: They prefer to stay in shallow pools and swamps with plenty of aquatic vegetation.

Breeding/Nesting: Both parents dig out the nest, usually in an earthed stream or river bank. A mound of dirt, a root ball, or a trench cut into the ground may also be used. They lay 3-6 eggs. Both parents share the 14-16 day incubation.

Size: This is one of the smallest known kingfisher species and can grow up to 12.5–14 cm long, including the beak. Females usually range from 14-16 grams and males from 14-21.5 grams.

Its back, shoulders, and wings are blackish blue. It has an orange tail and a white throat. The bird boasts an orange-yellow belly, dark-red eyes, an orange beak, and feet.

Habitat: It usually thrives in lowland forests near streams or ponds.

The Northern Cardinal is one of 25 North American birds with a redhead species. They are a member of the family Icteridae, along with such familiar species as robins, bluebirds, tanagers, orioles, mockingbirds, and thrashers.

Appearance: The Northern cardinal is the most popular bird in Tennessee. This species is known for its beautiful plumage, especially its bright red coloration.

Males are a stunning red with a black mask and throat. Females are light orangish-brown with red on their crests, wings, and tail. Both sexes have a short, thick bill that is perfect for cracking seeds.

Habitat/diet: These birds prefer open areas such as parks and gardens, where they feed on insects, fruit, berries, seeds, nuts, and grains.

You can find Northern Cardinals in dense vegetation foraging for seeds, fruit, and insects.

Breeding/nesting: They nest in trees and shrubs, laying 2–5 eggs each season. The male and female both sing during courtship displays. Their song consists of 3–6 notes, repeated every 5 seconds.

The Northern Cardinal is active during daylight except when breeding season begins. During nesting season, they feed primarily early morning and late evening. They rest during the midday heat.

The black oystercatcher bird is an amazing bird native to the shoreline of western North America. This is the only bird representing the oystercatcher family.

Appearance: The bird is entirely brown with a dark blue head, its bill color varying from bright red to little orange in the adult species. The legs are pink with a bright yellow iris, and red eye rings.

Diet: It feeds on shellfish and other creatures found along the rocky shore.

Habitat: Black oystercatchers live their entire lives near the ocean or adjacent bays in rocky marine environments where they can nest and forage.

The bird species was initially named “sea pie.” However, it was later renamed by naturalist Mark Catesby when he saw it eating oysters.

Appearance: It has distinctive black and white plumage and a long, bright orange beak. The head and breast are black, along with the greyish-black back, wings, and tail.

They are the only bird species in their environment that can crack hard shells like crabs and oysters.

Other seabirds that eat mollusks usually have to drop them onto rocks from high up to break them open. Oystercatchers are the only beach bird that can open them just by using their strong bills.

Habitat: They spend most of their time at intertidal areas and adjacent beaches, especially barrier islands.

Breeding/nesting: During their breeding period, they can be seen in coastal habitats, including sandy beaches, dune beaches, salt marshes, mudflats, marsh islands of mud, and dredge spoil islands of mud and gravel.

Their nests are shallow depressions scraped into the sand by an adult. Both parents will alternate, incubating the eggs for 25 to 27 days. When born, the chicks are covered in tan down and can run within 2 hours of hatching.

Size: It is around 15 to 18 inches and weighs just under one pound.

Appearance: It has a very unique appearance. Its body is mostly sapphire blue with a red crown. Its eyes are surrounded by a yellow ring on each side.

Their four front feet have three toes pointing forward and one toe that can rotate forward or backward. Males and females differ in that females may have a greenish beak.

Diet: The primary diet includes fruits, flowers, and seeds of both wild and cultivated plants.

Habitat: It lives in forests and wooded valleys.

Breeding/Nesting: It prefers to nest in the woodlands and open forest areas. Both parents share incubation and feeding duties.

They lay two to three eggs which take approximately 25 days to incubate. They then spend another 4 to 7 weeks nesting with their parents before they fledge

Appearance: As the name suggests, they have an amazing orange bill also note the bold black-and-white head pattern, black chest setting off the white throat, and greenish-olive wings.

Habitat: It likes to live in subtropical or tropi­cal moist lowland forests in the wilderness.

It is the national bird of Malaysia.

Size: They measure almost 3 feet long and weigh up to 6 pounds.

Appearance: They have black-feathered bodies and white-feathered legs. Their tail is white with a black band; the beak and casque are orange and red.

Habitat: They prefer tropical and sub-tropical areas and are seen in lowland areas.

Breeding/Nesting: Hornbill birds are monogamous and mate lifelong. They breed from January through April. These birds’ courtships and bonds are crucial because the females need their males to provide them with everything they need while incubating and caring for the chicks.

Appearance: An enormous seagull with short legs, white plumage, a black crested cap on its head, and a bright orange beak.

Diet: They are carnivores, so they feed on small fish, shrimp, and crustaceans.

Habitat: It can be found in Europe, the Americas, and the Caribbean islands, in warm coastal marine waters.

Breeding/nesting: The breeding season begins in April and lasts until July. They nest on island or isolated beaches and lay one or two eggs per clutch. Once the female lays her eggs, she will stay in the nest for about 25-30 days.