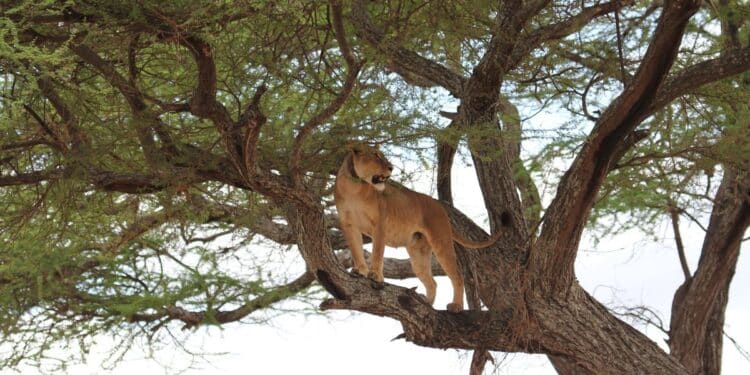 We all know that lions are big, powerful cats. But did you know that can lions climb trees? It’s true! Lions are pretty good at climbing; sometimes, they do it just for fun. Here are some interesting facts about lions and their ability to scale trees.

Lions can climb trees, but not every lion. In general, any lion can climb a tree. However, it depends on the availability of trees and the weight of lions that will rise. The larger and adult lions don’t climb because they are too large or too heavy.

Lions can climb trees and sometimes use them to survey their surroundings or take a break from the heat of the day. They are also known to scale trees when hunting prey, as it gives them an advantage over their unsuspecting victims. In addition, some lions may occasionally climb a tree for fun or playfulness.

Even though it seems impossible, lions have been repeatedly spotted in the branches of trees. This behavior is becoming more common among the specific pride of lions. There are two populations of tree-climbing lions that are only found in East Africa.

Some areas in Africa, such as the Serengeti, have been known to report sightings of groups of lions lounging in trees. These lions aren’t unique in any way; they are just like any others. The only difference is that they enjoy climbing trees.

How can lions climb trees?

Lions use their long claws and powerful hind legs to climb trees. Their back legs have an additional joint that allows them to rotate their feet, which helps them gain traction on the tree trunk. Coupled with muscular upper body strength, this gives lions the ability to scale up trees easily.

Lion cubs, unlike adult lions, spend more time beneath the trees. Although cubs aren’t as capable of tree-climbing as adult lions, they can still climb trees. But because of their size, they may have troubles.

At first, the cubs will practice their climbing skills on the lower branches and work their way up higher. The adult lions will often help guide them until they are more confident in their abilities.

Why do lions climb trees?

There are many reasons a lion might climb a tree; here are some of the most common:

If a lion’s prey is chasing it, it will most likely head for the closest tree. This happens more often when the original prey is a young mother who is protectively fighting for her offspring.

Lions use the fig and acacia trees as vantage points to get uninterrupted rest while monitoring their territories for prey, such as hyenas and leopards.

The ground level can become unbearably hot when the summer sun beats down mercilessly. It can be too hot to touch. So, it’s sometimes better to relax a little bit above ground level where it might be cooler, and there is usually a pleasant breeze blowing.

Being up in a tree helps lions avoid sitting or laying in cold water overnight and keeps them away from bad weather and heavy rain. Flies are often attracted to the ground level where it rains, so by being higher up, lions can avoid them too.

Not only do drier areas ward off flies, but spots with more of a draft also help because the flies have to work harder at staying in one place. After heavy rainfall hit Zimbabwe in 1963, the relentless Stomoxys biting flies drove lions up into trees.

Tse Tse flies are attracted to the heat and movement of animals at ground level, so by perching up high, lions are less likely to be bothered by them.

Some scientists say that lions like to have an elevated view of their surroundings, just like cats. It’s doubtful that a lion would climb a tree for fun. Nevertheless, they will only go onto the strongest branches closest to the ground.

Where to see lions in trees?

The most famous tree-climbing lions reside in Queen Elizabeth National Park in Uganda due to the abundance of available African trees that are both suitable and accommodating for this behavior.

Although it was once believed that tree-climbing lions only lived in Tanzania’s Lake Manyara National Park, recent discoveries show that they are not as rare as initially suspected. You can find the whole pride of these lions lying in trees throughout various parts of Africa.

There is a particularly famous story of two lions climbing a tree to steal a leopard’s kill at Londolozi in Sabi Sands.

How high can lions climb trees?

On average, a lion can climb up to heights of around 15-20 feet, usually in acacia, sycamore-fig trees, and sausage trees, which have broad and supportive branches. Male lions are larger and stronger than females, so they typically climb trees more easily.

So, can lions climb trees? Yes, they can! Although not always seen in action, our majestic cats have been known to scale trees given the right circumstances and motivation. So remember, next time you come across a lion lounging in a tree – there is no need to be alarmed! It’s just another typical day in Africa.