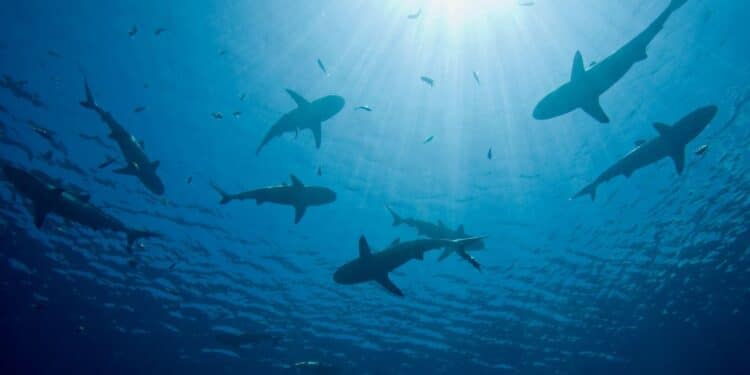 Can sharks swim backward? The answer is definitely no! Sharks have unique and interesting swimming abilities; they can swim quickly forwards, but they CAN’T swim backward, and if you pull a shark backward by its tail, it will soon succumb to death. So dive into this fascinating topic with us now – it will surely open your eyes!

Sharks can’t swim backward because their pectoral fins cannot curve upward like other fish, allowing them only forward motion. These fin shapes also help reduce sediment being stirred up as they swim and make it difficult for sharks to slow down when reaching the seafloor.

Shark swimming is propelling themselves through the water with their fins and tails. Sharks use their pectoral and pelvic fins for steering and maneuvering, their caudal fin for propulsion, and their dorsal (upper) fin for stability. These combined movements create a powerful, sinuous swimming style that enables them to reach impressive speeds.

However, shark swimming is not a backward-and-forward motion like most other fish. Sharks can move in a figure-eight pattern, which means they can turn and spin quickly without losing speed or momentum. This adaptation allows them to attack prey efficiently and makes it difficult for predators to catch up with them.

Unfortunately, this figure-eight swimming pattern means that sharks cannot swim backward. The turning and spinning of the figure-eight pattern do not allow for backward movement.

What happens if you pull sharks backward?

To ensure they receive the required oxygen, sharks must continuously swim forward as water enters their mouth and rushes out of their gills, where gas exchange occurs.

The fins of the shark cannot resist the force applied when pulled backward. This can cause the shark to become disoriented and unable to escape the puller. It can quickly become drowning and succumb to death.

How many styles can sharks swim?

Depending on the species, sharks can move in a variety of styles – from floating to flapping and even wriggling. They may also cruise or undulate through the waters. Some sharks, like the legendary Great White Shark, use a “thunniform” swimming pattern, it generates power through the caudal fin rather than whole-body undulation.

The Shortfin Mako Shark is a tireless swimmer, with the capacity to travel up to 36 miles (60 km) daily. As an obligate ram breather – meaning it requires continuous swimming in order to receive oxygen – this form of respiration helps sustain its prowess as a powerful swimmer.

No matter which swimming pattern they use, all sharks are limited to one-directional forward movement and cannot swim backward.

Which fish can swim backward?

Most fish can swim backward but they simply don’t showcase this maneuver unless it’s an absolute necessity. In the wild, fish display their reverse swimming abilities when catching prey, with some of them being expert swimmers in doing so – such as Triggerfish, Eels, and Blue Gill Sunfish.

All electric eels and electric fish have the potential to propel themselves in reverse, with one exception – Rhabdolichops Troscheli. This particular species of electric fish are unable to partake in backward swimming due to its unfavorable habitat conditions.

These fish predominantly inhabit areas with powerful water currents, requiring them to perpetually swim forward for their survival. If they attempt to go back against the current, it is likely that they will be swept downstream and won’t survive.

So, Can sharks swim backward? The answer to this question is a resounding no. Sharks have unique and powerful swimming abilities that allow them to move quickly and efficiently forward, but they lack the physiological adaptations to swim backward.

Attempts to pull sharks backward can be dangerous for them, as it can cause them to become disoriented and unable to breathe, leading quickly to death. Sharks are undoubtedly fascinating creatures, but their inability to swim backward is just another one of the extraordinary ways to make them so remarkable.