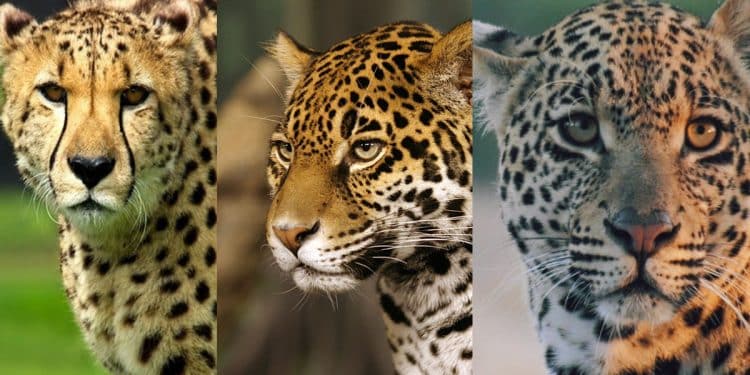 Jaguar vs leopard vs cheetah – taxonomy

The three big cats are members of the class Mammalia, order Carnivora, and the family Felidae. The cheetah is a member of the genus Acinonyx, whereas the jaguar and leopard are part of Panthera. The following are the taxonomic names of each species:

Since all three animals are big cats, they are quadrupeds with tails and bodies covered in fur. However, there are key physical differences that can help us to distinguish between them.

Jaguars have a robust build, with a short and stocky body and muscular limbs. They have large heads in comparison to their bodies, and their tails are also relatively short.

Leopards are similar in size to jaguars, but they have a slimmer build and longer legs. They also have smaller heads and longer tails.

Cheetahs are the smallest of the three, but they are built for speed. They have long legs and a slim body, which helps them to reach high speeds quickly. They also have unique black spots on their coat which act as camouflage when hunting prey.

What is the difference between cheetahs and leopards?

Physical characteristics of the leopards

On the other hand, leopards have relatively short legs compared to their massive bodies. They have strong muscles and a big jaw with a broad head and giant skull. They have developed muscular bodies that make them agile climbers.

The color of leopards varies from pale yellow to ruddy orange. They also have black spots on their bodies, which can be circular or square and form a less distinct rosette.

Each individual has a distinct body pattern. The appearance of a dominant allele, as with jaguars, can result in melanism and an all-black leopard, commonly known as a black panther.

Cheetahs are smaller; they have longer limbs and thinner bodies when compared to the rest of the feline family. Some of their features are small rounded heads, short legs, and a black stripe that runs from the inner corner of the eye to the snout.

Physical characteristics of the jaguar

The jaguar is a big, powerful cat that may reach up to 6.3 feet (2 meters) in length and weigh from 65 to 140 kg (143 to 308 lbs). Males are generally somewhat smaller than females. It has been discovered that the widest jaguars reside the farthest away from the equator.

Despite their small stature and short legs, they are muscular and strong, with big heads and fairly powerful jaws. They’re not as quick as other felines, but they make up for it in power and strength.

They have a light yellow or reddish-brown coat with large black dots, which may be seen throughout their body. They have rosette-like markings on their skin that vary in form but all follow the same pattern. All over their body, this pattern is present.

The jaguar’s belly, neck, and outer legs are white. Melanism is when individuals produce too much melanin, causing the overall color to be black. The result of this is a pure-black jaguar known as a “black panther.”

Jaguars vs leopards vs cheetahs – distribution and habitat

Leopards are found in several nations throughout Africa, the Middle East, and Asia.

They are found in a broader variety of habitats than jaguars, including semi-desert and desert regions. They may also be discovered in areas with prairie savannas, mountains, and tropical forests, but there is a tiny colony in the snowy fields of eastern Russia.

Cheetahs have been severely affected, with numerous species being extirpated and a few remaining in only select areas. They can also be found in both western and southern Africa. Their presence is restricted to the central deserts of Iran in Asia.

Although fragmented, they are present between northern Tanzania and southern Kenya. There are also records in southern Ethiopia, southern Sudan, northern Kenya, and Uganda.

Jaguars are the biggest felines in North America and the only ones currently living in this area. Their distribution has been reduced significantly, with some populations now extirpated from numerous locations.

They are currently dispersed unevenly through the southwestern United States, Central America, and South America before reaching Argentina via the Amazon.

They can be found in the United States, Mexico, Honduras, Nicaragua, Costa Rica, Guatemala, Panama, Brazil and Venezuela Suriname, Belize, Guyana, French Guiana, Colombia, Ecuador, Peru, Bolivia, Paraguay, and Argentina. Brazil and Venezuela have the largest specimens, but they are considered extinct in El Salvador and Uruguay.

The habitat of jaguars varies greatly depending on the particular region they inhabit. They may be found in rainforests, marshes, grasslands, thorny scrubland, and deciduous forests. In general, they prefer lowland tropical jungle forest land, xerophilic ecosystems, and pasture areas.

Behavioral difference of the jaguars vs leopards vs cheetahs

Jaguars are nocturnal animals that hunt alone and prefer to live in dense rainforests where they can stalk their prey.

Leopards are also solitary hunters, but they are more adaptable than jaguars and can be found in a wide range of habitats. They are mainly active during the day and night.

Cheetahs are the only member of the big cat family that is not nocturnal. They are diurnal animals that hunt in groups during the day.

Jaguars are known for their powerful and precise killing bite, which they deliver to the back of the neck or head of their prey.

Leopards kill with a suffocating bite to the throat, while cheetahs use their sharp claws and teeth to trip up and kill their prey with a bite to the neck.

The jaguar has the strongest bite of any big cat relative to its size.

Jaguars are the only big cats that regularly kill and eat humans.

Leopards will sometimes attack and kill people, but this is rare. Cheetahs have never been known to attack humans.

Jaguars are opportunistic hunters and will eat almost anything they can catch, including reptiles, amphibians, birds, small mammals, and even large mammals such as deer, pigs, and cattle.

Jaguasr vs leopards vs cheetahs – reproduction

Jaguars can breed all year since females have heat cycles that last about 37 days on average. These last between 6 and 17 days. Between December and March, mating is most likely.

When the female is in heat, she leaves her territory and makes noises to communicate her mood to the males. In order to mate with the female, the males will be able to fight one another.

After mating, females will not allow a male to approach, especially if a calf has been born. The pregnancy lasts between 91 and 111 days, with anywhere from 1 to 4 cubs in the litter.

In leopard society, both males and females may have numerous partners. Female leopards go through a cycle every 46 days, with the heat lasting seven days. They will be able to copulate up to 100 times per day during this period.

When a female is in heat, the male will be able to detect it by her urine, which is laden with pheromones, or because she will be able to approach and brush the male with her tail. Pregnancy lasts 96 days on average, and they usually give birth to 1-6 cubs.

Cheetahs also mate at any time of year and have a loose sexual culture. Both sexes can engage in sexual activity with various partners. During the breeding season, both males and females are known to migrate outside their territories.

Females are ready for reproduction around 14 days in cycles ranging from 3 to 27 days. The gestation period is about 95 days, and a litter usually contains 6 cubs. They can be more numerous in captivity, though.

The jaguars, leopards, and cheetahs are all near-threatened. The leopards and cheetahs are in a precarious position. There are several conservation strategies that continue to be restricted in order to genuinely safeguard the species.

There are also several organizations that focus specifically on conservation efforts for the jaguar. These include Panthera, Panthera Asia, and Jaguar Conservation International.

The jaguar is currently classified as Near Threatened by the IUCN. It is listed as Vulnerable by the CITES (Convention on International Trade in Endangered Species) and Critically Endangered by the Red List of Threatened Species.