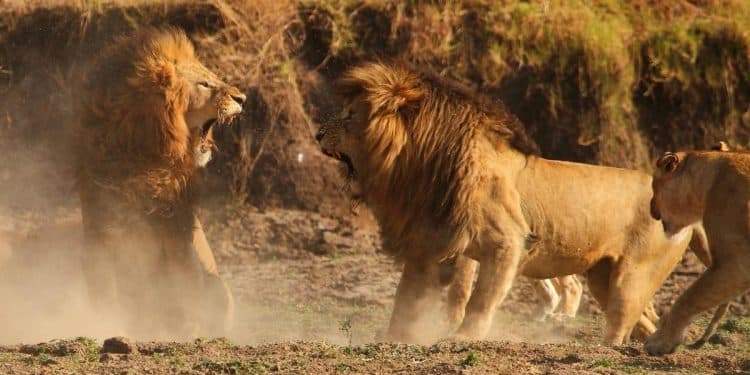 Do lions eat other lions? Did you ever wonder whether lions eat their brothers or sisters? Is it normal for lions to attack each other?

Lions are a member of the big cat family. They belong to the Panthera genus and Family Felidae. They are apex predators, and they spend around an average of 50 minutes eating during any 24 hours. Lions are hyper-carnivores, which means an average adult lion requires an average of 7kgs of meat.

Only slightly smaller than the Siberian tiger, the lion is the second largest big cat, with a muscular, deep-chested body, short, rounded head, round ears, and a hairy tuft at the end of its tail.

They are highly territorial and usually hunt at night. Their hunting strategy includes stalking prey from the bushes and pouncing upon their unsuspecting victims. Once they have caught their prey, they bring it down by biting its neck. The lionesses usually share hunting duties while the males take care of the rest.

Lions are cooperative and often work together to catch prey. Some animals might seem aggressive, but they’re very tolerant towards each other in reality. No predators hunt lions to eat them; however, they have a few natural enemies, such as hyenas and cheetahs.

There are several theories regarding why male lions sometimes kill other lion males. One theory states that they do this to access territories containing females and their young cubs.

Another suggests that they kill each other because they want to monopolize the mating opportunities with females. Their behavior varies significantly between species, so you’d need to study a specific type of cat before concluding.

Life in the wild is ruthless. There are no rules in the wild. And every animal is led by the same instinct. For different wildlife, survival means eating their own kind.

This brings us to the following question: Do lions eat other lions?

Some background on lions

Lions persist in a handful of countries across southeastern Africa, including Botswana, South Africa, and Kenya, but Tanzania’s population is by far the largest.

Male African lions can be ten feet long and weigh 400 pounds or more, and this one appeared to be pushing the limits of its species.

Today, the only country outside of Africa with wild lions is India, with a very small population surviving in and around the Gir National Park.

Asiatic lions (Panthera leo persica) are a subspecies of African lions, but only one tiny population survives in India’s Gir Forest.

Even though they are powerful and majestic and have no natural predators, it is inconceivable that African lion numbers have fallen by over 40% in the last 30 years.

In Mozambique’s Zambezi Delta, where the effects of a protracted civil war caused lion numbers to plummet, the largest-ever lion translocation project brought in 24 lions from South Africa in 2018—they’re now settled in and starting to have cubs.

In Tanzania, home to as many as half of all the wild lions on earth, the population is in free fall, having dropped by half since the mid-1990s, to fewer than 10,000.

Across Africa, up to one-quarter of the world’s wild lions have vanished in over a decade.

Do lions eat other lions?

Lions are not usually known to be involved in cannibalistic activities. However, often in nature, events can be unusual and create unusual behaviors.

There are documented cases of lions killing cubs of other lions eating them and abandoning the carcass afterward. They brutally kill or injure each other in rivalry combat, but usually, they let go of the loser.

While the Mapogo coalition — a group of six male lions who would kill and eat entire pride in Sabi Sand — proved this could happen, the number of adult lions eating other adult lions is relatively low.

What do lions usually eat?

In the wild, lions’ diet consists almost exclusively of meat. As a result, big cats would consume more than 70% of meat out of their total diet. Kings of the jungles are both apex and keystone species because of their wide prey range.

Generally speaking, lions do not eat dead animals but may steal recent kills from other animals like hyenas.

In the wild, lions prefer mammals weighing from 400 to 1200 lb. They include zebras, African buffalos, wildebeest, gemsboks, and giraffes…

Lions can eat a LOT! Adult female lions need to eat about 11 pounds of meat daily, while adult males eat 16 pounds or more daily. Both can eat up to 15% of their body weight during just one meal.

For a male, that’s the same as 70 cans of cat food! Lions are well known for being greedy and will hunt animals even when they are not hungry. When tucking into a juicy zebra, if another animal comes near, a lion will often forget that kill in its eagerness to catch some more food.

Lions can’t run very fast. They are pretty slow, with a maximum speed of 60 kilometers per hour compared to a cheetah’s 97kph. Plus, they can’t run for long without getting out of breath. Because of this, lions need to be clever hunters.

By stalking their prey, they can get as close as possible before the chase begins. Very slowly, crouching near the ground, lions creep as near their victims as possible. Making sure they haven’t been seen or heard. They can jump on an animal quickly, taking it by surprise.

When hunting smaller animals, lions will often ankle-tap their prey. By clipping an animal’s ankle from behind while it is walking or running, the lion aims to trip it up, making it easier to catch. Larger animals are brought to the ground by jumping on their backs. This is usually when the more enormous, stronger male lions decide to join in.

Although lions can hunt alone, it can be much easier to have a little help. When hunting in a group, each lion has its own place. Like in a football team, they will choose to be in either left, right, or center positions. If stalking is too difficult, a group of lions may decide to ambush their prey instead.

Running very quickly at an animal force it to run towards other lions or into bushes, where it will be trapped. Working together like this means that the lions are more likely to catch their prey. Lions have even been known to climb trees and jump on top of unsuspecting elephants as they walk underneath!

Even though lionesses do most of the hunting while the males just sit and watch, once an animal has been caught, the males are always first to feed. Lions are good at working together to catch their prey, but they are terrible at sharing and will fight over their food. Often smaller, weaker lions go hungry, while the others are first to have their fill. Depending on the size of the kill, they may not get anything.

Lions are scavengers and will happily steal food from other animals or eat leftovers after a kill. This means that when other carnivores have caught prey, lions will often bully them into giving up their meal.

This doesn’t always work with hyenas who live in a clan family. If there are more hyenas than lions, often they will get to hold on to their food. Even the biggest clan of hyenas is no match for a male lion. The King of Jungle always wins!

Lions don’t usually drink a lot of water but often choose to live near rivers, streams, and waterholes. This is not because they are thirsty but because they know prey animals will come to drink sooner or later. They can lay patiently in wait until dinnertime.

Areas with lots of water often flood, so lions must jump in at the deep end to catch their food. Because swimming is such good exercise, these lions are often vast and muscly, just like Olympic swimmers!

Why don’t lions eat other lions?

Big cats eat a lot. As a result, their diet consists of medium-large mammals.

The majority of those animals lions hunt are herbivores. Meaning they feed on plant matters. Herbivores are rich in fat, a necessary nutrient for lions’ diet.

On the other side, lions do not usually eat other meat-eating animals. In the wild, predators rarely eat other predators.

Even when they eliminate their number one enemies (hyenas), lions won’t eat them.

In general, lions do not eat other predatory animals, especially not their own kind.

Sometimes, in fights between the two males, one of the lions often suffers fatal injuries. The winner generally leaves the crime place without eating the carcass (unless it faces starvation and it needs to eat something or it would die).

Most of the time, big cats do not participate in cannibalistic behavior. The meat of another predator does not provide enough nutritional value. And also, it doesn’t taste good.

The pride lioness is the one that does the hunting most of the time, and male lions offer assistance.

Incidents have been documented where female lions attack the male. One such incident occurred in 2018 at the West Midland Safari Park in the UK.

Another incident also in 2018 was reported when a lioness attacked and killed a male lion in captivity at the San Diego zoo in the US. The pair had been living in the zoo for eight years before this unusual incident occurred.

Why does a lioness kill a lion?

Usually, female lions do not kill other lions. But in the wild, disputes can arise over food and pride leadership, leading a lioness or group of lionesses to attack male lions.

Often this is over food disputes but may also be to protect their cubs or their territory. And on occasions, they do not want to mate with the male lion in question.

Sometimes, a male lion may kill a female lion who refuses to mate with him.

Do lions eat their cubs?

Male lions are known for killing lion cubs when they take over a new pride, but they rarely eat them.

A lioness would protect her cubs at any cost. Yet, occasionally lionesses are the ones that will end their cubs’ lives.

Even though infanticide is not as often, there are a few reasons why mother lionesses execute their offspring. Sometimes cubs behave strangely. Meaning they don’t respond to their mother as they should generally do. Or they have some physical issues.

In that case, the lioness wouldn’t see them as her infants, and her maternal instinct wouldn’t be present.

In addition, if there is a lack of food supply and the lioness must choose between her or her cubs, she usually decides that cutting infants would increase her chances of surviving.

To remove pieces of evidence and to prevent attracting unnecessary attention from different predators, the mother sometimes decides to eat her babies.

Humans are the biggest threat to the lion population, and lions don’t have natural predators in the wild since they are apex animals.

Helping humans learn how to live with lions is key to ensuring survival. Conservation organizations are working to change attitudes toward lions through compensation initiatives. Some of these models offer communities financial rewards when their local lion populations rise, while others pay farmers to replace their livestock killed by lions.

Other conservationists have focused on creating protected areas for lions. In Botswana’s Selinda area, only a single lioness and her cub lived there when filmmakers Dereck and Beverly Joubert, both National Geographic Explorers, turned the land into a protected reserve and photographic tourism camp. Now about a hundred lions roam the reserve.

You might also be interested in similar lion articles if you liked this article. Here are some recommended ones: