According to some experts, the Earth is already experiencing its sixth great mass extinction event. Hundreds of species have already been wiped out by human actions – and many more are on the verge of going extinct.

The planet’s current biodiversity, which has evolved over 3.5 billion years of trial and error, is the most diverse ever seen in the history of life.

But researchers now say it has reached a tipping point. 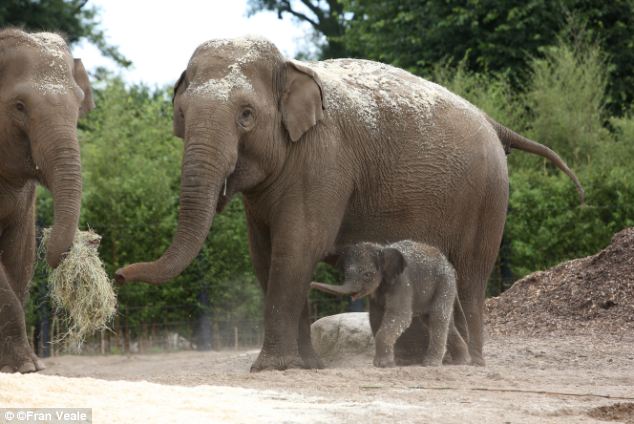 Large animals – described as megafauna and including elephants, rhinoceroses, polar bears, and countless other species worldwide – face the highest rate of decline

An international team of researchers has issued a warning in a new study published in Science that while past extinctions have been caused by natural planetary changes or cataclysmic asteroid strikes, the current die-off may be linked to human activity.

Lead author Rodolfo Dirzo, a professor of biology at Stanford, designates an era of ‘Anthropocene defaunation.’

Since 1500, more than 320 terrestrial vertebrates have become extinct.

Populations of the remaining species show a 25 percent average decline in abundance, and the situation is similarly dire for invertebrate animal life.

Approximately 16 to 33 percent of all species in the world are estimated to be globally endangered or vulnerable.

Large animals, such as elephants, rhinoceroses, polar bears, and numerous other species around the world, have experienced the most significant rate of decline in history. This parallels previous mass extinctions.

Their size and meat mass make them easier and more attractive hunting targets for humans.

These species make up a minor share of the animals at risk, yet if they disappeared, their loss would have cascading effects that might jeopardize the health of other species and, in certain circumstances, even human health.

For example, previous studies conducted in Kenya have removed patches of land from megafauna like zebra, giraffe, and elephant populations and seen how an ecosystem responds to the loss of its largest species.

Within a few years, these regions are filled with rats, grass and bushes grow unchecked, and the rate of soil compaction drops.

As a result of this, the numbers and circumstances of animals reduced in areas where seeds have been planted. The danger of predation decreases as food becomes more readily accessible.

As a result, the number of rodents rises dramatically, as does the incidence of disease-carrying ectoparasites in their harbor.

Where human density is high, you get a lot of defaunation, which leads to higher rates of rodents and thus more infections, increasing the risk of disease transmission.’ said Dirzo, a senior fellow at the Stanford Woods Institute for the Environment.

‘Who would have thought that just defaunation would have all these dramatic consequences? But it can be a vicious circle.’

The scientists also detailed a troubling trend in invertebrate defaunation.

The human population has increased by two-thirds in the past 35 years, while the number of invertebrate animals – such as beetles, butterflies, spiders, and worms – has decreased by 45 percent.

As with bigger animals, the decline is mostly driven by habitat loss and global climate change, and it may have trickle-down consequences for our everyday lives.

Insects pollinate more than 75% of the world’s food crops and contribute an estimated 10% of the world’s economic value of food production, according to UNESCO. Insects also have a significant impact on nutrient cycling and decomposition of organic materials, which is essential for ecosystem sustainability.

Native predators, such as wolves and coyotes, ki.l.l billions of pest animals each year in the United States alone.

Dirzo said that the solutions are complicated.

Immediately reducing rates of habitat change and overexploitation would help, but these approaches need to be tailored to individual regions and situations.

He said he hopes that raising awareness of the ongoing mass extinction – and not just of large, charismatic species – and its associated consequences will help spur change.