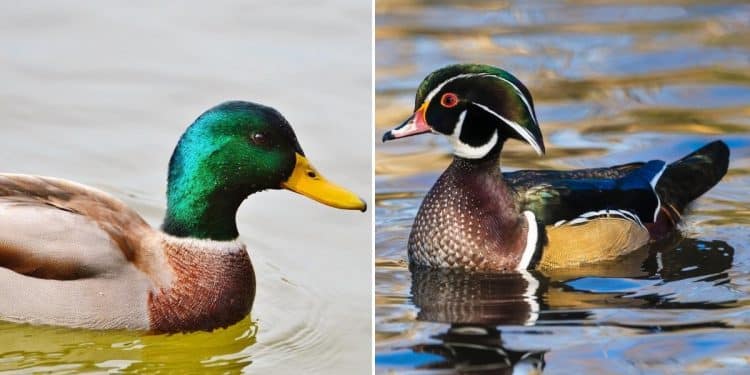 Green headed Duck is not just a male Mallard duck with a green head; there are more ducks with green heads that you may have spotted.

Male ducks are called drakes, and they often have a much more colorful appearance than female ducks in northern species. The male will molt after the breeding season and become similar to the female, called the eclipse plumage.

This will happen after nesting, and then they will molt again to get their breeding colors in the winter.

Ducks have such colorful and interesting patterns and shapes. Even ducks’ feet can be bright orange or blue.

These ducks with green heads migrate and spend the summer breeding further north, like in Canada, and the winters further south. All except the Mallard, which does not usually migrate.

So if you don’t know what that duck with a green head is, take a look at this guide and find out.

How to identify dabbling ducks

What are dabbling ducks? Ducks can be split into two broad groups: dabblers and divers. As the name suggests, diving ducks feed mainly by diving underwater, using their strong feet (and sometimes their wings) to swim. Dabbling ducks, however, feed predominantly at the surface, sometimes even grazing on land. Many dabblers can often be seen upending, with their heads underwater and bums in the air.

Let’s look at seven different ducks that have greenheads below:

Mallards are large ducks with green heads on the males. They have bright yellow bills and gray bodies with brown breasts and black towards the tail. They have a curl of tail feathers and a blue patch on the wings bordered with white which is called a speculum.

Mallard is a very adaptable species, being able to live and even thrive in urban areas, which may have supported more localized, sensitive species of waterfowl before development.

The mallard was one of the many bird species originally described in the 1758 10th edition of Systema Naturae. They frequently interbreed with their closest relatives in the genus, such as the Anas.

Genetic analysis has shown that certain mallards appear closer to their Indo-Pacific relatives, while others are related to their American relatives. Mitochondrial DNA data for the D-loop sequence suggest that mallards may have evolved in the general area of Siberia.

Mallard bones rather abruptly appear in food remains of ancient humans and other deposits of fossil bones in Europe, without a good candidate for a local predecessor species.

Mallards are differentiated in their mitochondrial DNA between North American and Eurasian populations, but the nuclear genome displays a notable lack of genetic structure.

The mallard is the most common duck in the United States, with the greatest abundance between the Appalachian and Rocky mountains.

Both sexes have an area of white-bordered black, or iridescent blue feathers called a speculum on their wings; males especially tend to have blue speculum feathers.

Females and juveniles are mottled dark brown with orange bills, but they still have the blue speculum. Upon hatching, the plumage of the duckling is yellow on the underside and face (with streaks by the eyes) and black on the back (with some yellow spots) all the way to the top and back of the head. Several species of duck have brown-plumaged females that can be confused with the female mallard.

Mallards dabble to feed on seeds, rootlets, and tubers of aquatic plants off swamp and river bottoms.

Mallards remain all year in most of the lower 48 and the western coast of Canada and Alaska. While Mallards were originally restricted to North America and the central parts of Eurasia, humans have introduced them to every continent except Antarctica for hunting and agricultural purposes.

Mallards are one of the most commonly spotted and recognizable ducks that will happily be fed on ponds and rivers. They are dabbling ducks that feed on the water plants and do not dive.

Male Mallards don’t quack; only the female does. The male makes a rasping sound.

A noisy species, the female Mallard, has the deep quack stereotypically associated with ducks. Male mallards make a sound phonetically similar to that of the female, a typical quack, but it is deeper and quieter than the female.

When incubating a nest or when offspring are present, females vocalize differently, making a call that sounds like a truncated version of the usual quack. This maternal vocalization is highly attractive to their young.

The repetition and frequency modulation of these quacks form the auditory basis for species identification in offspring, a process known as acoustic conspecific identification. In addition, females hiss if the nest or offspring are threatened or interfered with. When taking off, the wings of a mallard produce a characteristic faint whistling noise.

Mallards are very long-lived, and they have been recorded at 27 years old.

Mallards migrate along numerous corridors, but the greatest concentrations move from Manitoba and Saskatchewan through the Midwestern United States to the Mississippi Alluvial Valley.

Mallards winter throughout the United States, with the highest densities typically recorded during winter surveys along the Mississippi Flyway from Cape Girardeau, Mo., to the Gulf of Mexico. Among the dabbling ducks, mallards are one of the latest fall migrants.

They also have the most extended migration period, which lasts from late summer to early winter. Mallards are found in a variety of habitats, including dry agricultural fields, shallow marshes, and oak-dominated forested wetlands. Mallards are vagrants to Central America and the Caribbean.

The mallard can crossbreed with 63 other species, posing a severe threat to indigenous waterfowl’s genetic integrity.

While domestic breeds are more popular, pure-bred mallards are sometimes kept for eggs and meat, although they may require wing clipping to restrict flying or training to navigate and fly home.

Mallards are one of the most common varieties of ducks hunted as a sport due to the large population size.

The iconic green head of the breeding males is highly revered by hunters around the world, and the Mallard’s ability to adapt to and breed under any conditions has also made them an ideal choice for farmers interested in raising waterfowl.

Common Goldeneye males are ducks with green heads that are iridescent and can look almost black. They have a white spot under their yellow eyes. They have white bodies and sides and black backs.

Female Common Goldeneyes are grayish-brown with brown heads. Both males and females have black bills.

Common Goldeneye breed in Canada and Alaska in summer and migrate late to the lower 48 for winter.

They nest in holes in trees and use whatever is in there, plus some plucked-down feathers for the nesting material.

The Greater Scaup, commonly known as the “Bluebill” duck in the U.S., is a mid-sized duck with a gorgeous dark blackhead, bluebills, and white sides. Females are brown with a white patch above the bill.

They look very similar to Lesser Scaup except but with rounder heads.

Greater Scaup breed in the north of Canada and in Alaska before migrating to the Pacific and Atlantic Coasts for winter, but more on the Atlantic side. They form huge ‘rafts’ of birds out at sea.

These are diving ducks that eat invertebrates and plants at the bottom of lakes and the sea.

Greater Scaup nest on the ground and add grass and down feathers to a small depression.

American Wigeon is a small duck with green stripes on the sides of their heads and with white caps on the males. The rest of them are grayish-brown.

Females are brown with grayish-brown heads. Male and females have pale beaks.

American Wigeon breed predominantly in Alaska, western Canada, and between the Rockies and the Midwest. They spend the winter in the southern US states and along the Pacific and Atlantic coasts.

They breed on the ground, far from water in fields and grasslands. American Wigeon is a dabbling duck that feeds on vegetation both during the war and on the land. They will also eat insects and invertebrates.

Green-winged Teal are small dabbling ducks with a green stripe along the sides of their heads in the males. The rest of their heads are brown, and they have grayish bodies.

Females are brown with a yellow streak along the tail. Both males and females have a green wing patch.

Most Green-winged Teal migrate from breeding grounds in Alaska, Canada, and the northern US States to the southern US States and the Pacific Coast from British Columbia Down. Some ducks remain around the Rocky Mountains all year.

Green-winged Teal are dabbling ducks that feed on invertebrates and seeds. Their nests are on the ground in dense covers such as grass or thickets.

They can often be spotted on flooded ground and shallow ponds in large flocks of up to 50 thousand.

Northern Shoveler males are ducks with green heads and large spoon-shaped black beaks that make them easy to spot dabbling ducks. They have reddish-brown sides, white chests, and black backs. Males also have blue patches on the wings.

Females are mottled brown with a blue shoulder patch and large orange beaks.

Northern Shovelers spend the winter in the southern half of the US and along the Pacific and Atlantic Coasts up to Canada. They migrate to the western half of Canada and northwestern US states for breeding in the summer. Some also breed around the Great Lakes.

They can often be found in sociable groups in shallow, stagnant water.

Crustaceans, invertebrates, and some seeds make up the diet of shovelers and they filter them out by stirring up the bottom and swinging their bills from side to side through the water. They then push the water out through comblike projections called lamellae along the edge of their bills, catching any food.

Northern Shovelers nest on the ground in short vegetation close to water.

Male Wood Ducks with beautiful green heads with a striking crest at the back with black and white markings and red eyes. They really are birds with great hairdos.

Their bodies are a checkerboard of colors, with reddish-brown chests, buff sides, brown backs and tails, white markings, and flashes of blue.

Females are brown with grayish-brown heads and white around their dark eyes. They have blue patches called speculum on their wings.

Wood Ducks eat seeds, fruit, and insects usually in the water, but they will also feed on land in fields and forests. They can be found in wooded swamps.

So, the next time you’re out and about and see a duck with a green head, now you know that it’s not just a Mallard! And, if you happen to be in Canada during the summer breeding season, keep your eyes peeled for these other ducks. It will be interesting to see how their ranges continue to expand as the climate changes.