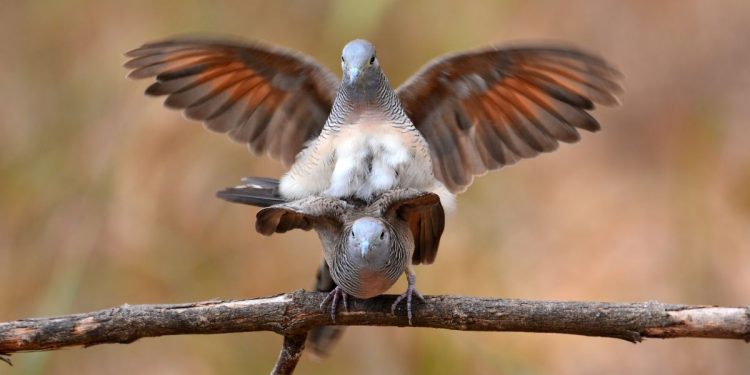 Birds are amazing creatures. They fly high above us, sing beautifully, and dance. But did you know “how do birds mate?” It is also quite interesting.

Birds are very social animals living together in groups called flocks. Flocking behavior has evolved over time, and its purpose varies depending on the species. Some birds form monogamous pair bonds, whereas other species flock together to defend territories or look out for predators.

Mating behaviors vary from species to species. For example, some birds perform elaborate courtship dances before mating, whereas others copulate without any foreplay at all. In addition, male birds often display colorful plumage during the breeding season. This helps females choose mates and decide whether to accept them.

The mating system of a bird is determined by how it interacts with other group members. The most common type of mating system is polygyny, which occurs when one male mates with multiple females.

Polygynous males usually have more offspring than monogamous males because they can mate with several females. However, this does not always happen. Sometimes, a female will mate with two different males simultaneously. This is known as polygamy.

In contrast, monogamy is characterized by a single male mating with only one female. Monogamous pairs usually stay together until death.

The mating system of a bird depends on many factors, including age, gender, personality, and environmental conditions. For example, if a male bird loses his territory, he may leave his partner and start looking for another mate. If a female bird dies, her mate might abandon her nest and find another acceptable partner.

How do birds attract mates?

Scientists have been studying bird mating behavior for decades, and there are some fascinating facts about birds that you might not know.

Most male birds are at their brightest and most colorful at the beginning of spring. Male birds use their bright colors as signals to females that they’re healthy and fit enough to father offspring.

Many female birds aren’t as brightly colored as males because they don’t want to attract attention when sitting in the nest. This helps protect them against predators while they’re incubating eggs.

Some species have elaborate courtship rituals. For instance, male peacocks strut around, spreading their tail feathers and showing off their beauty.

Females prefer males with longer tails because those tails are usually associated with health and strength.

Their tails are covered in iridescent blue and green feathers that shimmer like rainbows. These beautiful plumage features allow males to show off during mating displays.

But fancy feathers can also get you into trouble. Birds such as the African long-tailed widowbirds shed their tail plumes at the start of the breeding season. They make them move slower and escape from predators.

Other birds display together in pairs to prepare for breeding. Great crested grebes run together over the water, shaking their heads and dangling waterweed. Cranes make dancing leaps into the air, calling loudly and tossing up pieces of earth.

Other birds sing elaborate songs to woo potential mates. A male robin sings a “roundelay” song to entice females to join him in his nest.

Male birds are known to build several different nests to impress a particular female. In some cases, they build multiple nests within the same tree. But some males go beyond what most people think of when it comes to building nests. Australian bowerbirds spend hours creating huge houses out of grasses and leaves.

They even create a front garden, sweep it clean with a twig, and decorate it with flowers and pebbles. And they do it all in the hopes of impressing a female.

Other birds dance to attract mates. If a female isn’t interested, she may try to chase the male away. In response, he performs a courtship dance to distract her. He shakes his wings, flaps his feet, and even twirls his head like a ballerina.

What is cloaca in birds?

The cloaca, which means “sewer” in Latin, is a common feature among many animals. There are several types of cloacae depending on the animal species.

Birds, however, have a unique type of cloaca. They use it for mating and laying eggs.

Cloacae are internal chambers that end in openings, and through these openings, birds’ sex organs discharge sperm or eggs. This same opening also serves a less-sexy purpose: the expulsion of urinary and digestive waste.

During mating season, the cloacal openings of both male and female birds enlarge, protruding slightly from their bodies. Birds’ swollen cloacal regions get rubbed together when they’re feeling frisky. Sperm from the males’ cloaca travel into the female’s ova for fertilization.

Although most birds have a cloaca, not all do. In ostriches, cassowaries, kiwi, geese, and some species of swans and ducks, the males do not use the cloaca for reproduction but have a phallus.

Do Birds Have Penises

While it might seem odd to think about a bird having a penis, it turns out that it happens pretty often. In fact, according to one estimate, around 3% of all species have some form of penis, while others only have cloacas.

Ducks, swans, geese, and many flightless birds like ostriches and emus have penises, as do Tinamidae, a family of shy ground-dwelling birds.

How do birds mate?

Both male and female bird species seek out the best suitable mates. After finding one, the sexual act is surprisingly fast.

When mating season comes around, the cloacal opening of both males and females swell up, reaching their maximum size and protruding out just a bit from their bodies.

When the timing is just right for reproduction, the male perch on the female, and she moves her feathers so that her cloaca is exposed.

Arching back, the males often rub their cloacas against the females’ backs, balancing on them. She arches her back and moves her tail to one side. The male hunches over, and their cloacas touch briefly. Sometimes referred to as a “cloacal kiss.” During this brief contact, the male ejaculates sperm into the female cloacas.

The balancing act is tricky, and it may last a while so that the birds can have more than one cloacal kiss, increasing the chances of insemination. It has been estimated that only one to two percent of sperm ejaculate and reach the egg. Quite a few kisses may be needed.

After insemination, the female may produce eggs for several hours. Or it could take months. She can store sperm inside her ovaries until the condition is suitable to nest.

Do birds get pregnant?

The answer to this question depends on what you mean by “pregnant.” If you mean that a bird is carrying an egg inside her body, then no, birds do not get pregnant as mammals do.

During the breeding season, the female needs a mate to fertilize the eggs. After mating, the male deposits sperm into the female’s oviduct, which travels down into the uterus. Once there, the sperm swims toward the egg and fuses with it.

How long does it take for a bird to lay an egg after mating?

Once fertilized, the female will start laying eggs. This process takes approximately 24 to 48 hours, depending on temperature and humidity. A clutch of eggs is laid in nests, which are just small piles of twigs and leaves.

The embryo develops rapidly during the incubation period, which lasts anywhere from 14 to 21 days, eventually turning into a fully formed baby bird.

Most birds remain on their nests to raise their broods because most of their babies are born without feathers or down. Their eyes are closed, and they are entirely helpless.

The parent will bring the partly digested, soft food back out of its stomach and feeds it to the young in small amounts.

Over time, they develop down, open up their eyes, grow feathers and learn to fly. The length of time varies based on the species. Small birds usually hatch within three to eight weeks. Some larger birds, like eagles and owls, can hatch several times a year.

Can Birds Lay Eggs Without Mating?

In most bird species, it’s physically possible for females to mate and lay eggs without a male. However, for an egg not to be fertilized and therefore not to be able to develop into a viable chick successfully, it needs to be fertilized by sperm produced by a male.

Hormonal changes within the reproductive system of female birds enable them not only to lay eggs without a partner but also to do so while still in the presence of a male.

This happens because the female bird produces high levels of estrogen and other hormones, stimulating the brain, which then causes the hypothalamus to release gonadotropin-releasing hormone (GnRH), triggering ovulation.

Do birds mate with another species?

The process of birds mating with another species or breed is called hybridization. As many as 16% to 20% of bird species are thought to hybridize. Examples include swans, geese, pheasants, birds of paradise, and chickens.

Notably, some birds have been observed to mate with members of different families. It is believed that about one-third of all bird species are capable of hybridizing. However, not every cross produces viable offspring, and those that do often die soon afterward.

For hybridization to be successful, there must be a close genetic similarity between the parents. This is not necessarily true even within the same family.

Close relatives of birds such as crows, hawks, owls, eagles, falcons, vultures, penguins, flamingos, ostriches, and emus can interbreed, but not all crosses produce viable offspring.

Do birds mate all year round?

Some birds mate even when they aren’t planning to lay eggs – eagles are just one example. But most birds only mate during the traditional breeding season, although conventionally, this is considered spring. However, it varies depending on where you live. For instance, March to June are probably the busiest times for bird mating in much of Europe and North America.

In many parts of the world, birds start nesting in early autumn and continue throughout the winter. This is because there isn’t enough food for both parents and offspring during the coldest part of the year. So while some birds, like woodpeckers, might nest in late summer, others, like owls, will begin laying eggs in midwinter.

Closer to the equator and further south, the traditional breeding season becomes slightly less rigid. Birds don’t necessarily follow the same pattern every year, either. Some species will mate well into the following year.

How often do birds mate in a season?

Mating may occur at any time during the breeding season, but the chicks’ laying and hatching usually happen once or twice each year.

Females often attempt to lay a new egg when their first one has failed early in the nesting period. Most bird species produce just one round of offspring each year.

Other species of birds do not mate every year. Some eagles, such as the Crowned Eagle and the Harpy Eagle, lay eggs every two to three years. The Wandering Albatros is the same, breeding only once every two years.

These birds must be carefully reared for nearly a whole year before they can raise their own broods again.