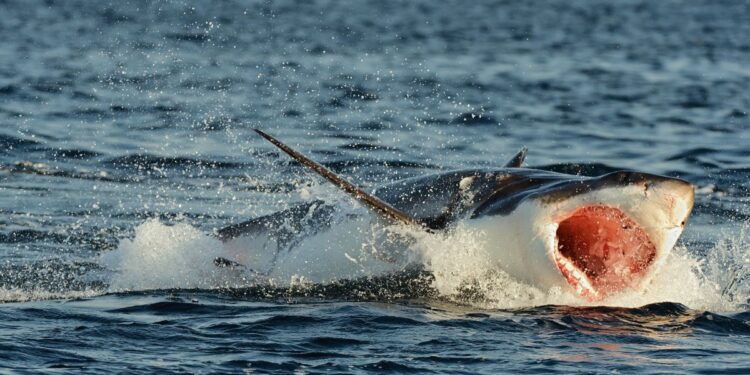 How fast can a shark swim? It’s a question that has long intrigued scientists and nature lovers alike. While we might be unable to outswim these predators, it’s interesting to know just how fast they can go.

Sharks can swim at an average speed of 5 mph (8 km/h). However, not all sharks are created equally – some species can reach speeds up to 31 mph (50 km/h)! This means they can outswim most predators and catch their prey while still in the water!

Read on to find out what the latest research says about shark speeds.

What factors affect how fast a shark can swim?

The speed of a shark is affected by several factors such as size, shape, body temperature, swimming style, and environmental conditions. Larger sharks tend to have a higher swimming speed than smaller individuals. Sharks also adjust their speeds based on the type of prey they are chasing and how far away the target is.

How Fast Do Sharks Really Swim?

The answer to how fast a shark can swim depends on the species. Some sharks might be able to reach speeds of 20 mph (32 km/h) or more. The fastest species can reach speeds of 31 mph (50 kph) but the slowest is just 0.34m per second. While this is impressive, it’s important to note that these speeds are typically only achieved in short bursts and for short distances.

What is the fastest shark?

The shortfin mako shark (Isurus oxyrinchus) is found in tropical and warm temperate waters worldwide but has been known to visit cooler climes at times. It’s a powerful swimmer and the fastest of all known shark species, reaching speeds of 31 mph (50 kph) with bursts up to 46 mph (74 km/h)!

The mako shark is known to chase and catch even faster fish, such as sailfish and swordfish. These two fish can reach speeds exceeding 60 mph when leaping out of the water. The mako itself is also capable of giant leaps, jumping up to 20 feet (6 meters) from the surface of the sea.

A recent study found that a young mako in New Zealand can go from 0 to 100 feet in two seconds, equivalent to more than 60 mph. Thankfully, these sharks are hardly ever encountered by swimmers or divers because they live so far offshore. And when they do cross paths with people, makos rarely attack.

Some fish, like the shortfin mako and great white shark, can conserve heat in a unique way to cold-blooded creatures. In other words, they’re not entirely cold-blooded and can create the power needed for quick spurts of speed.

Other fast-swimming species include the great white shark, the tiger shark, the blue shark, and the whale shark.

What is the slowest shark?

Greenland shark is known to be one of the slowest sharks, with a cruising speed of 0.34 m/s. It is a bulky fish with a rounded snout and small fins relative to its body size. Its coloration ranges from gray to brown, similar to that of the spiny dogfish (Squalus acanthias). The main difference between these two species is that the Greenland shark lacks a spine in front of both its dorsal fins.

Greenland sharks can survive in freezing cold-water habitats such as the Arctic Ocean and North Atlantic, from Baffin Bay eastward to the Barents Sea. Additionally, its range southward extends to the North Sea and waters near the Eastern Seaboard of the United States.

How fast can a great white shark swim?

The great white shark (Carcharodon carcharias) is a fearsome predator found in the coastal surface waters of all oceans. Great whites are mighty swimmers, reaching speeds of up to 25 mph (40 km/h) with bursts up to 34 mph (56km/h) while chasing prey. They can also accelerate quickly over short distances, making them the second fastest sharks in the world.

They are skilled hunters that launch themselves at high speeds to overtake their prey, mouth open and sharp teeth bared. Not many creatures in the ocean can outswim a Great White Shark; this is one of the reasons they are at the top of the apex predators.

How fast can a great blue shark swim?

The great blue shark (Prionace glauca) is a slender yet lively species found in the open waters of all oceans. It is usually seen swimming around the surface or near the shore.

This species has been nicknamed “blue dogs” or “puppies of the sea” because they are curious and gentle, investigating everything that crosses their way. It is one of the most athletic species in the shark family and can reach speeds of up to 22 mph (35 km/h). This makes it the third fastest-swimming shark, behind only the mako and great white.

The blue shark’s agility allows it to make sudden turns and tight circles to catch its prey. It also uses speed to make speedy getaways from predators like killer whales and large sharks.

How fast can a whale shark swim?

The whale shark (Rhincodon typus) is the largest fish in the ocean, with adults reaching up to 12.5 feet (3.8 m) long. This species is found in tropical and warm temperate waters worldwide and is one of only three filter-feeding sharks.

Despite its size, the whale shark is not a graceful swimmer. They are usually seen slowly cruising near the surface but can reach maximum speeds of up to 4 mph (6.4 km/h). While this may seem slow, it is still impressive, considering how large they are.

Whale sharks have no natural predators and rely on their size and camouflage to defend themselves. They also use their low speed and agility – combined with their patterned skin, which serves as a form of camouflage – to help them avoid danger from larger predators like killer whales or great white sharks.

How fast can a tiger shark swim?

The tiger shark (Galeocerdo cuvier) is a large predatory species found in tropical, subtropical, and temperate waters around the world. It is most commonly seen near islands in the central Pacific. This shark is a loner and prefers to hunt at night. The name ‘tiger’ comes from the dark stripes that run down its body, but these fade as the shark gets older.

The tiger shark is a dangerous predator known for its ability to digest various items, including fish, seals, birds, smaller sharks, squid, and turtles. It is often feared for its attacks on humans who enter its territories, such as swimmers, divers, and surfers in Hawaii. It has been given nicknames like “the bane of Hawaiian surfers” and “the wastebasket of the sea.”

This powerful swimmer can reach up to 20 mph (32 kph). Tiger sharks have been recorded as swimming even faster when chasing prey or being threatened by danger. They are hefty but agile creatures and can quickly move through the water.

Sharks are some of the fastest and most efficient swimmers in the animal kingdom. Making them difficult prey for other predators and even allowing them to capture their meals while still in the water! By better understanding their physiology, we can learn more about how they move through water so effortlessly.

If you find yourself in the vicinity of a shark, it’s essential to stay calm and avoid panicking. Remember that sharks usually only attack humans if they feel threatened or mistake us for prey. So as long as you keep your cool, you should be fine!