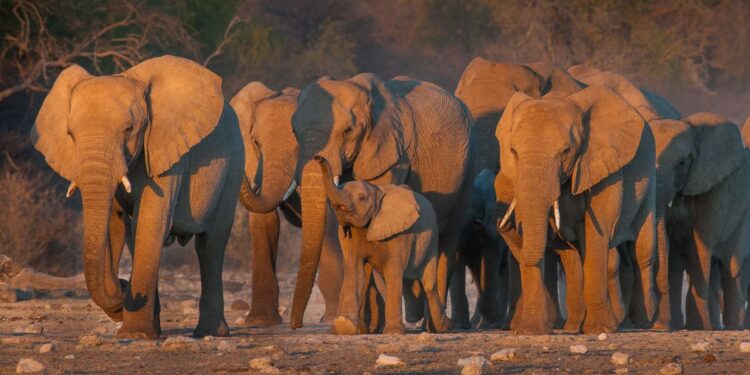 Elephants are the largest living land animals, and one of the most powerful. They can weigh up to 14,000 pounds, have tusks that grow up to nine feet long, and live for over 60 years. However, do you know how long is an elephant pregnant?

The average elephant pregnancy lasts 22 months depending on where they are geographically located. This article will explore how long an elephant is pregnant as well as why this time frame varies based on location.

How long is an elephant pregnant in different species?

Asian elephants’ pregnancies last 18-22 months while African elephants are pregnant for 22 months. The difference in duration is due to the different habitats that they live in as well as environmental factors such as food availability or weather conditions.

For example, if an elephant’s habitat becomes more arid than usual, this will shorten its pregnancy because it affects them physically and emotionally.

It can also alter their metabolism so they need less energy from food, which may provide insight into why Asian elephants have longer gestation periods compared to their African counterparts who gestate slightly shorter pregnancies but with faster growth rates amongst offspring.

Why do elephants have long pregnancies?

Elephants have a gestation period of 22 months, which is more than double the length of other mammals. This long pregnancy period provides time for the newborn calf to grow and mature in order to survive in its environment. The mother elephant also needs this extended time so that she has enough energy reserves to cultivate a nourishing uterus for her calf.

By having more time to gestate, the calf is able to reach a size where it can be born with functional organs and muscles that would not be developed quickly enough in a shorter gestation period.

This longer pregnancy period allows the mother elephant to have sufficient time to build up her energy reserves and find an appropriate place to give birth before she has to care for the calf on her own. Ultimately, this extended gestation period ensures that the newborn elephant will have a better chance of survival in its environment.

Some of the more intelligent animals have longer gestation periods than others. For example, chimpanzees share a similar length of gestation to humans. Human pregnancies typically last 9 months, while chimpanzee pregnancies average around 8 months, and dolphins, another animal with advanced intelligence, have a gestation period that lasts for about a year.

Researchers believe that elephants need a longer gestation period than other animals because having a larger brain requires more energy during pregnancy throughout the development of an offspring’s central nervous system so having a gestation period that exceeds two years allows babies to become smarter compared to those born after shorter periods of time in the uterus.

What can we learn about elephant pregnancies?

Based on this information about how long is an elephant pregnant and why that timeframe is different between species geographically located in Africa or Asia, what can we learn about elephant pregnancies?

Did you know? The longest recorded elephant gestation period was an astounding 24 months. That baby must have been huge!

In order to give birth, female elephants must find a safe place to do so without being disturbed by predators or humans which may lead them to stay close to home while they’re pregnant and not migrate as far from their herd as usual.

Other animals have long pregnancies

Whales and dolphins have a 17 to 19 months gestation period. Other long gestations include:

What animal has the longest pregnancy?

The frilled shark has the most prolonged pregnancy, lasting for 3 ½ years! Frilled sharks are rare creatures that live deep in the ocean. They have an eel-like appearance and can grow to be 7 feet long. Scientists speculate that frilled sharks carry their young for an extended period of time due to the frigid temperatures of the ocean depths.

In Japan, a study of these sharks revealed that the pups are born alive. They emerge from their eggs and spend 3 ½ years in their mother’s womb.

What animal has the shortest pregnancy?

The title of “mammal with the shortest gestation period” is constantly being challenged as new species are discovered. Currently, the Virginia Opossum is thought to have the shortest pregnancy at 12 days, but this may soon change. The Stripe-faced Dunnart, another marsupial has been discovered to have 11-day pregnancies!

But both keep developing in their mothers’ pouch for weeks afterward. Compared to 200lb baby elephants, Virginia Opossums are the size of honeybees at birth and baby Dunnarts are the size of a grain of rice when they’re born! When they’re firstborn, they crawl into their mom’s pouch where they continue to grow.

It’s amazing to think that some animals can be pregnant for over 3 years! While it takes a lot of time and effort to grow a baby elephant, the reward of getting to experience their intelligence and emotional complexity is worth the wait. Ultimately, all pregnancies are incredible feats of nature no matter how long!