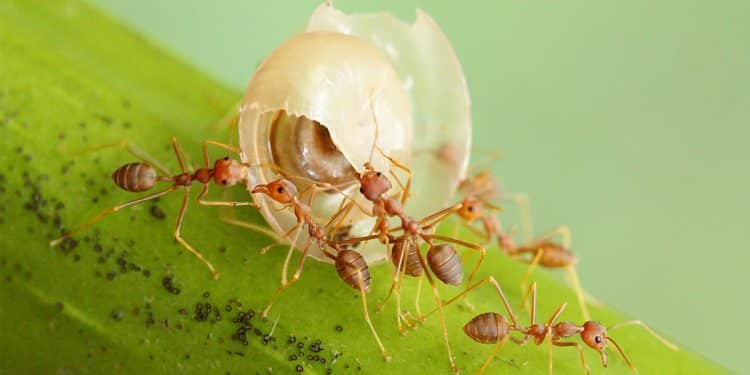 How many legs do ants have? Most people don’t actually know the answer to this question. Ants are fascinating creatures, and they have a lot of interesting features that set them apart from other insects.

Ants are able to survive in a wide range of environments. They can be found in tropical rain forests, deserts, and even in cold mountain regions. ants are very adaptable and can live in almost any type of habitat.

Ants are social creatures and live in colonies. A colony can have thousands or even millions of ants! The ants work together to build their nests and care for their young. Each ant has a specific job that helps the colony function properly.

For example, some ants collect food while others build the nest or care for the young. When an ant dies, another ant takes its place so that the colony can continue to thrive.

Ants are important members of many ecosystems. They help to break down dead plants and animals and recycle them back into the soil. Ants are also a food source for many animals.

In this blog post, we will take a closer look at ants and discuss some of the things that make them unique. We will also explore their leg structure and find out how many legs they actually have!

Why do ants have legs?

The most obvious explanation for ants having legs is to get around. Ants spend a substantial amount of time hunting for food or exploring the nest.

While the fertile young queens and males in many species have wings to help them spread, most ants are workers who do not possess wings.

Ants have developed an antigravity system in their legs that allows them to scale even vertical surfaces.

The antennae are the most important tactile appendages for ants, but some species will also utilize their front legs to touch and feel objects and organisms.

Just by using their bodies, many ant species are capable of constructing huge and intricate structures. These might be bridges, floating rafts, or even towers.

They will clench their legs and mandibles together to maintain contact with one another and the surfaces surrounding them. Ants use these structures to overcome barriers as a whole that would be too difficult for individual ants.

Ants use their legs in many ways, one of which is to clean themselves. This helps to avoid the spread of disease by eliminating dirt and food from their bodies. As the main sense organs, the antennae are particularly sensitive to keeping clean.

Some ants also have tiny brushes on their legs, derived from the tibial spur. They may utilize these brushes to clean their antennae thoroughly, ensuring that they remain in excellent form.

Ants communicate in a wide range of ways, with pheromones being one of them. On the other hand, some ant species utilize their legs to generate a kind of warning signal by brushing them over a distinct spike on their backs.

The sound that ants make when they stridulate is known as stridulation. In addition to using their legs to communicate, ants may use their legs in various ways, such as moving them or touching one another.

How many eyes do ants have?

Ants have compound eyes. This means that each eye is made up of many tiny lenses. Ants can see a wide range of colors, but they cannot see very far.

They use their eyes to communicate with other ants and to navigate their way around their environment. Ants also have three simple eyes located in the center of their head. These simple eyes are used to sense light and dark.

Overall, ants are amazing creatures with a lot of interesting features! They may be small, but they are certainly mighty.

Do ants have antennae?

Yes, ants have antennae! Ants use their antennae to touch and smell their environment. The antennae are also used to communicate with other ants. Each ant has a unique scent that is used to identify it from other ants.

The antennae are also used to sense when there is danger nearby. If an ant detects danger, it will warn the other ants in the colony using its antennae.

What do ants eat?

Ants are omnivores, which means that they eat both plants and animals. Ants typically eat small insects, but they will also feed on nectar and fruit juices. Some ants even keep aphids as pets! Aphids produce a sweet substance called honeydew that ants love to eat. ants will also collect and store food in their nests to share with other ants in the colony.

Do ants have wings?

No, ants do not have wings. However, some ants can fly short distances using their wing-like structures. These winged ants are called “alates.” Alates are responsible for starting new colonies. When it is time to start a new colony, the alates will leave their current colony and fly to a new location

Yes, ants do sleep! However, they don’t sleep for very long. Ants only sleep for about six minutes a day. During this time, they enter a state of rest called “torpor.” Torpor is similar to hibernation in mammals.

When an ant is in a state of torpor, its body temperature, and metabolism decrease significantly, this allows the ant to save energy and survive on less food.

The average lifespan of an ant is about 45 days. However, some ants can live for up to seven years! The queen ant is usually the longest-lived member of the colony. This is because the queen ant does not have to forage for food or fight in battles.

The worker ants are usually the shortest-lived colony members because they do most of the work.

Yes, ants can feel pain. Ants have a nervous system that allows them to sense when they are injured. When an ant is hurt, it will often try to escape from the source of pain. Some ants even produce chemicals that numb their pain receptors so they can continue working despite being injured.

Ants are insects that have six legs in three pairs. These legs are connected to the second major body section, the thorax, which comes after the head and before the abdomen.

The ant’s legs include many segments, specifically the tarsus, tibia, and femur. These many joints enable ants to have excellent mobility in their legs.

The alternating tripod gait of ants is well-known, with the front and rear legs on one side moving at the same time as the middle leg on the other.

The majority of ant species are egg-layers, with the queen of the nest laying eggs. The egg will hatch into a larva, which is a grub-like creature without legs. The larvae’s duty is to eat, and workers feed them daily until it is ready to pupate.

Ant larvae, like caterpillars, go through a metamorphosis. Some species create silken cocoons around themselves, while others do not. They grow their legs while pupating, allowing them to move as adults.

Ants have six legs, which allow them to travel quicker and assist them in carrying the weight of the food they may be carrying. Walking with all six legs, on the other hand, is a difficult endeavor.

A typical ant walks in a manner that is different from humans. For walking, an ant uses its own unique gait. The legs are split into two groups in this method of movement. Only one group of legs is used at one time.

One group touches the ground while the other is in the air during movement. There’s an aerial phase when their legs don’t touch the ground. This is also observable in humans and most animals.

A worker ant always has at least three feet on the ground. This is known as a sprinting gait and enables ants to begin running without any prior preparation. It’s obvious in racing ants.

Apart from ants, the phenomenon of sprint gait during the process of running is also seen in some birds, cockroaches, spiders, and even crabs.

And did you also know that there are more ants on Earth than there are people? There are about one million ants for every person on the planet! So, next time you see an ant, take a close look at it and count its legs. It is quite fascinating to think about how these small creatures can do so much!

The Meaning of Black and Blue Butterfly: Interesting facts