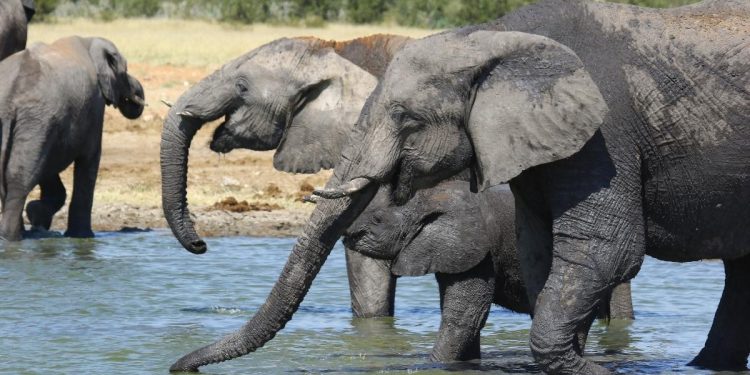 How much does an elephant weigh? This is one of the most common questions that people ask when they see elephants in books, news, in videos, or on safari.

The answer to this question can be difficult because different elephant species have different weights. African elephants are typically heavier than Asian elephants and males tend to weigh more than females.

Elephants also gain weight as they get older. To help you figure out how much your favorite animal weighs, we created a list with some general information about their weight based on age and type!

How much does an Asian elephant weigh?

Asian elephants have been around for centuries and have been used in many ways by humans. They have been used for transportation, war, logging, and labor. In some countries, they are still used for these purposes.

The Asian elephant is one of the smallest species at 2-3 times smaller than African Elephants. However, they are now known to be their own distinct species and weigh less than their relatives.

Asian elephant weighs between 5000 and 12000 pounds with a height measuring from 6.6 to 9.8 feet tall; Male Asian elephants are larger than females. In general, these animals eat around 200 pounds of food per day but only drink 100-120 liters of water each day because they get most of their hydration from the plants that they eat.

These animals are found all over Asia including India where they began domesticating thousands of years ago as shown by their ancient artwork depicting this creature in Hindu mythology!

Pygmy elephants are smaller than their African and Asian elephants. They’re found in the forests of Southeast Asia, from Thailand to Malaysia. The average height is 4 feet tall at the shoulder and they weigh around 2,000 pounds.

How much does an African elephant weigh?

African elephants once roamed all over Africa and were even found in Europe and Asia. Over time, however, they became extinct in these areas due mainly to hunting for ivory. Elephants are still found in some parts of Asia but today their population is about ten times smaller than that of Africa’s according to The Atlas of the Elephant.

The African elephant is the largest living land animal, weighing in at 4000-15000 pounds with a height from 8.2 to 13 feet. Adult males weigh on average around 2-7 tons while average weight females are about half that.

African elephants endured many years without having tusks play a major role in the life of an elephant. They are used for digging for food and water, fighting, removing bark from trees to eat the tender inner bark, and signaling. Tusks are also used as a tool to strip the bark off logs so that the wood can be eaten.

How much do elephant tusks weigh?

Elephant tusks are a type of incisor tooth that protrudes from the mouth. They grow continuously throughout an elephant’s life and can reach up to 9 feet in length.

How much do these teeth weigh? It depends on two factors: The age and gender of the animal, and whether or not they have been cut down. Tusks can grow up to 10 inches per year and weigh between 25 and 45 pounds.

Males often possess larger tusks than females which is due to their longer growing phase before maturity when food sources were more abundant; therefore males tend to have Family Link: Male juveniles stay behind closer mothers/ Ancestral Landscape where herds feed while females move out into open grasslands during dry seasons.

Tusks make up about 12% of an elephant’s body weight on average, which is why they play such a big role in their lives as digging tools, weapons for fighting other animals like rhinoceros, and signals for communication with one another.

What do elephants eat? So that they have a giant body.

Elephants are herbivores and eat a wide variety of plants. They prefer to eat leaves, but will also eat fruits, bark, flowers, and roots.

The African Savanna Elephant is the largest species of elephant in Africa and is the largest living land mammal. They can be found living in herds with up to 100 individuals, usually comprised of females and their offspring. Males typically come from unrelated families, often moving around with them at different times throughout the year according to what is seasonally available nearby.

African bush elephants have been classified as a vulnerable species by the International Union for Conservation of Nature (IUCN) due to habitat loss and poaching. How the population is doing has been a topic of much debate since 2010 when they were reclassified as endangered.

The African forest elephant can be found living in groups or herds of up to 100 individuals known as a family group made up of females, their offspring, and one or more males from unrelated families who move around together at different times throughout the year according to what is seasonally available nearby.

The African forest elephant is a subspecies that can be found on much of the African continent, such as West-Central Africa as well as Benin, Cameroon, Central African Republic, Congo (Kinshasa), and Equus.

How much does a baby elephant weigh?

How much does an elephant weigh at birth? African elephant babies may start life weighing between 66 – 100 kg (their Asian counterparts range from 166 to  246kg) and grow to 132 – 200 kg during adolescence. They may reach adulthood at age 20 and live 40 years.

When they reach maturity, they begin to produce young in their 30–50s which is why the male population becomes the majority after 10 years of age. The female population begins to decline around 60 years and will disappear within 3 decades of reaching maturity.

How much do 6-month-old elephants weigh?

A 6-month-old elephant baby will weigh between 100 and 150 kg. They will drink around 100 liters of milk per day. This weight will increase as the calf grows older, but it will always be less than the average adult elephant.

How much do baby elephants weigh at 1 year old?

They can weigh up to six times what they weighed at birth! This is because calves continue to drink milk from their mothers and start eating vegetation around this age.

Most of an infant’s weight comes from its mother’s milk which is high in fat and nutrients. Elephant calves can drink up to 400 liters of milk a day!

Baby elephant is born with all of their baby teeth already fully developed, which is why they’re able to start eating solid foods like hay and grass within minutes of being born. Baby elephants will typically nurse for six months before they’re introduced to other food sources.

They’re not just cute because of how small they grow; there’s a reason why these animals sustain themselves better than those found in Africa! The high-energy diet provided by their mothers is what allows them to have a body mass that makes it easier for them to handle long migrations.

How much does an adult elephant weigh?

There is a lot of variation in terms of how much an adult elephant weighs, depending on the species. The weight of an elephant is determined by its diet, age, and sex.