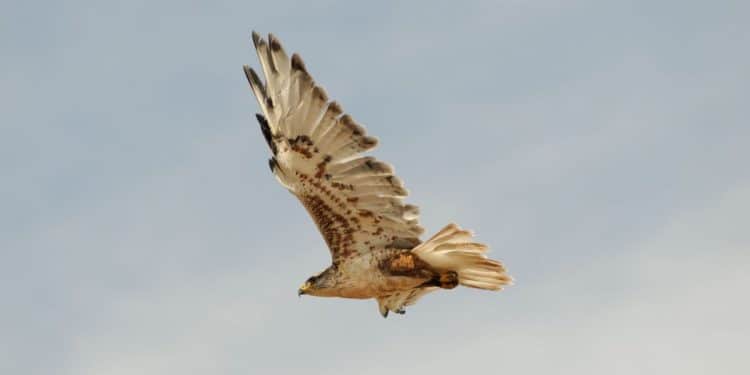 Hawks are fascinating birds because they vary significantly from species to species. The great thing about them is their diversity, so knowing something about each kind helps you identify them easily.

All of these raptors hunt and eat other animals. Some live in Florida year-round, and some migrate to Florida in the winter season.

Knowing the characteristics of each hawk can help you identify them better and save you time and frustration. You should check out our exciting article if you are a bird enthusiast and want to know more about the types of hawks in Florida.

What is the most common hawk in Florida?

The most common hawk in Florida is the Red-shouldered hawk. It is a medium-sized bird of prey found throughout Central America and South America. It’s usually seen alone or in pairs.

Appearance: They have a barred rufous chest. Adults Red-shouldered hawks are colorful with black-and-white chequered wings and red-brown barred breasts. The tail is black, with narrow white bands. Young are brown above and white beneath, marked with brown streaks. In all stages, the tips of the wings are edged with thin, pale, crescent shapes.

Adults in lineatus group are rich reddish-brown on the chest, and the one in extimus group (the Florida form) has a pale head and breasts than the others.

However, they also eat birds, fish, eggs, carrion, and fruit. It flies low over fields and roads, looking for prey when hunting. Its long legs allow it to cross short distances. It often perches on fence posts and telephone lines.

Habitat: Red-shouldered Hawks are primarily forest dwellers. It prefers deciduous forests with an open sub-canopy but can sometimes be found in forested suburbs.

Breeding/nesting: They nest in broad-leaved trees (sometimes in a conifer) near a pond, stream, swamp, and even parks.

They build a stick nest that may contain up to five eggs. The female lays 2-5 eggs per clutch, and incubation takes about 32-40 days. Both parents share the duties of raising the young.

What is the largest hawk in Florida?

In terms of size, the largest hawk in Florida is a Red-Tailed hawk. It is a large predatory bird of North America. Red-tailed hawks have one of the most distinctive appearances among birds.

During the summer months, Red-tail Hawks are one of the birds most often seen in Florida, and they occur in 3 percent of checklists from bird watchers who visit the state.

Size: In general, adult males can measure up to 46 cm long and weigh about 2 kg, while females can reach up to 40 cm and weigh around 1.5 kg.

Appearance: They come in several colors, including red, white, black, gray, and brown. But it turns out there are some subtle differences between the different hues.

Red-tailed hawks have a wide variety of colors and markings. These include a reddish tail tip, white underbelly, black shoulder stripe, and a red patch on their wings. They also have a distinctive pattern on their head. A red band runs along the side of their face and down their neck. This band continues onto their chest and abdomen.

Diet: The red-tailed hawk gets its name because it has a tail that looks like a “red flag.” This bird hunts mostly small rodents such as mice, squirrels, chipmunks, etc., but sometimes it eats larger birds (pheasants, starlings, or blackbirds), reptiles, amphibians, fish, and insects.

Habitat: Red-tailed hawks are typically found in open areas such as prairies, grasslands, meadows, savannas, and wooded hillsides. However, some populations live in urbanized landscapes, including cities and suburbs. These hawks often nest on tall structures like utility poles, towers, and buildings.

Breeding/nesting: Red-tailed hawks usually build their nests in the crowns of the tallest trees. Sometimes they use window ledges or billboard platforms. They have 1-5 eggs per clutch, and incubation lasts 28-35 days.

What is the smallest hawk in Florida?

The Sharp-shinned Hawk is the smallest in Florida and America. It’s also one of the top birds of prey.

Size: Males are usually larger than females. They range from 9.4 to 13.4 inches long and weigh 3 to 8 lbs. Their wingspan ranges from 17 to 22 inches.

Appearance: The sharp-shinned hawk is a medium-sized raptor with a distinctive shape. Its head is large and triangular. Its back is dark gray, it has an orange bar upper chest, and its underbelly is white. It’s got a long tail with dark stripes and short rounded wings.

It has a long, slender beak. Its feet are webbed, which allows it to walk on water.

Diet: They feed mainly on small birds, from about sparrows sizes to robins. Sometimes eats smaller numbers of rodents, bats, and larger insects.

If you spot sharp-shinned hawks near your backyard feeder, be careful not to disturb them.

The common types of hawks in Florida

Diet: They prey on rabbits, rodents, snakes, lizards, frogs, and other small animals.

Habitat: They are tropical birds that inhabit coastal lowlands, thorn forests, or pine-oak forests at high elevations in Central and South America.

Breeding/Nesting: Nests are built near the tops of tall trees, up to 60 feet high. They usually lay two eggs per clutch. The incubation period is about 34-39 days.

Appearance: The Cooper’s hawk is one of the most beautiful birds of prey in Michigan, but it’s also one of the rarest. They can sometimes appear to be a larger version of the Sharp-shinned Hawk.

Cooper’s hawks are known for their gorgeous plumage color. Their backs and wings are blackish-blue and have white spots along their sides. But it’s their eyes that set them apart. Unlike most birds of prey, whose eyes are usually red, Cooper’s hawks’ eyes are bright red. This coloration helps them see better in low-light conditions.

During the flight, they display crescent-shaped translucent patches surrounding their wings.

Diet: Cooper’s hawks are among the most common raptors found in Michigan. They hunt small mammals such as rabbits, squirrels, chipmunks, and mice. Sometimes they consume insects, including grasshoppers and crickets.

Habitat: There are fewer than 200 nesting pairs left in Michigan. This bird species is found throughout North America, though it prefers forests.

Size: Broad-winged hawks measure between 13 to 18 inches long. They weigh 9.3 to 19.8 pounds, depending on age, sex, and size. Their average weight is 14.2 pounds. A female broad-winged hawk weighs about 15 pounds, while males usually weigh 16 pounds.

Appearance: The broad-winged hawk is easily identified by its chunky body, long wings, and distinctive flight pattern. Its body is mostly brown, except for its head, neck, breast, and belly, which are lighter colored. This one is the smallest hawk species in Michigan.

The underside of adults’ broad-wings wings is a reddish barring running horizontally but vertically in juvenile birds.

Juveniles start out looking like adults but gain coloration over time. Adults have darker chests and bellies, and their tails’ undersides are usually barred with black and white.

Habitat: They tend to live in woodlands, usually deciduous or mixtu­reous forests, rather than the coniferous forest.

Breeding/nesting: Broad-winged Hawks build their nests in tall trees, such as oaks, pines, and maples, during the breeding season. They sometimes reuse their nests from previous years, or some belonged to other species. There are 1-5 eggs per clutch, and incubation usually takes 28-31 days.

Appearance: The northern harrier has a brown back, light underparts, and brown tail feathers. Both sexes have distinctive white rump patches.

They lay 4-5 eggs in a nest built on the ground, usually in a dense clump of vegetation. Incubation lasts 28-36 days.

Appearance: Swainson’s hawks have dark brown upper parts, light brown chests, and white bellies. They have a short, hooked beak and slightly pointed wings. When they perch, the wings extend past their tails.

Diet: Swainson’s hawk eats mainly mammals such as squirrels, gophers, mice, voles, and rabbits. They also feed on lizards, bats, snakes, and birds when they see them. Moreover, they also eat insects such as crickets, dragonflies, grasshoppers, butterflies, moths, and bees.

Habitat: Swainson’s hawk lives in open areas with scattered trees and brush, including agricultural lands, crop, and grazing land. You can also see them perched on telephone poles or fence posts.

Breeding/Nesting: There aren’t many nesting sites in the open country for Swainson’s hawks, so they use any tree near a field or low mesquite bush and power poles.

Appearance: Ospreys are large birds of prey found throughout North America. They are given some nicknames, such as Sea Hawk, River Hawk, or Fish Hawk. They’re known for their long necks and distinctive head shape.

Their upper parts are dark brown, while their undersides are white. Their heads are usually white, although their eyes are yellow. Ospreys have dark wing patches under their wings.

Size: They are enormous, measuring between 22 and 25 inches and 59-71 inches wingspan.

Habitat: They’re found in almost any expanse where there’s plenty of fish, including rivers, lakes, ponds, lagoons, swamps, and marshlands, but they can’t go deeper than three feet under the water’s surface.

Breeding/nesting: They usually build nests on snags, treetops, or crotches between large branches and trunks, on cliffs, or human-built platforms. Females lay 1-4 eggs per clutch and take 36-42 days for incubation.

Appearance: Adult Zone-tailed hawks have black plumage and look very similar to turkey vultures, but they have yellow legs, beaks, and light-colored bands on the tail.

Diet: Zone-tailed hawk feeds mainly on birds, reptiles, and amphibians, such as frogs, lizards, snakes, and even fish.

Breeding/Nesting: Zone-tailed hawks build their nests in tall trees. They usually lay 1-3 eggs per clutch, taking about 28-34 days for incubation.

Appearance: Great black hawks have black and brown plumages with two white bands and black bills with high yellow legs. They have long, heavy body, which makes them appear larger than other hawks.

Breeding/ Nesting: Great black hawks build their nests on trees with only one egg per clutch.

Appearance: Northern goshawks have a broad, rounded head with white stripes over the eyes, a short neck, and a medium-length tail. They have dark gray upper parts and pale gray underparts. Juveniles are brown and streaky, with narrow dark bands in the tail. Females are bigger than males.

Appearance: Ferruginous hawks have a broad head and a black hookbill. Their back feathers are rusty red, their belly feathers are whitish, and their tail is white. Juveniles have varying amounts of brown spotting on the belly and legs.

Appearance: Rough-legged hawks have one of the most distinctive appearances in North America. They live throughout much of Canada and the United States and can be found across the continent. There are two color morphs: dark and light.

The light morph has a brightly spotted chest, a darker belly, and a black wrist patch under the wing. The dark morphs have a blackish chest, a blackish belly, and a white wrist patch. The upper side of the wing is always dark, but the light individuals have some light spotting. Both sexes look alike.

Diet: Rough-legged Hawks are omnivores, meaning they eat plants and animals. This bird feeds primarily on rodents. However, it sometimes eats lemming, insects, and other birds such as ducks, frogs, mice, squirrels, and voles, among others.

Habitat: They live in open areas during winter, especially grassland and coastal prairies.

Breeding/nesting: They nest in the open country of the arctic, mainly in the tundra region, or on cliffs and outcroppings in the low-lying boreal forest, uplands, and alpine regions.