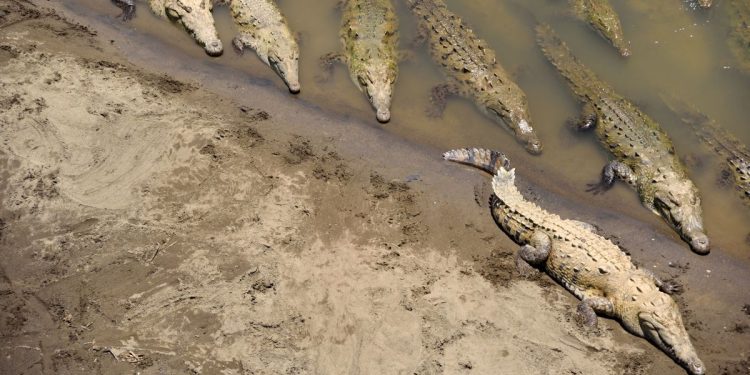 Many people are fascinated by crocodiles. These reptiles have been around for millions of years and continue to fascinate us today. In this article, we will learn more about “what is a group of crocodiles called?” and interesting facts about them.

A group of crocodiles is typically called a float. However, they can also be called bask, pod, or wallow depending on the situation. Read on to learn more about these amazing creatures!

Crocodiles and alligators are reptiles that belong to the order of Crocodilia. There are about 23 different species of crocodiles and they can be found in tropical regions around the world. Alligators are only found in freshwater environments in North America, China, and parts of South America.

These reptiles are some of the most feared animals in the world and have been known to attack and kill humans. Crocodiles are particularly dangerous because they are difficult to spot in the water and can strike with little warning.

Despite their reputation, crocodiles are important members of their ecosystems. They help to keep populations of other animals in check and play an essential role in the food chain.

If you ever find yourself near a crocodile or alligator, it is important to exercise caution. These animals are wild and can be dangerous. Never approach them without the proper safety gear, and always consult with local experts before swimming in areas where these reptiles may be present.

It is typically called a float. They can also be called bask, pod, or wallow depending on the situation. If you see a group of crocodiles on land, they are likely basking in the sun to regulate their body temperature. The pod is another term that describes a group of crocodiles in the water. Wallowing is when crocodiles roll around in mud or shallow water and are often done to keep cool or protect their skin from the sun.

Why do crocodiles live in a float?

There are a few reasons why crocodiles live in groups. One reason is for safety in numbers. By being in a group, they can watch out for predators and also warn others of potential danger. Another reason is that it helps them regulate their body temperature. When they bask in the sun together, they can keep each other warm or cool down if necessary. Finally, being in a group can be helpful for finding mates.

Do all crocodiles live in floats?

Not all crocodiles live in groups. Some species are more solitary and only come together to mate. For example, the Nile crocodile is typically a solitary creature but will form temporary pairs during the breeding season. Once the eggs have been laid and hatched, the mother will leave the area, and the young will fend for themselves.

Some crocodiles will leave their float if they are not getting along with the other members. This can happen for various reasons, such as competition for food or mates.

Where does a float of crocodiles live?

A group of crocodiles can live in fresh or saltwater environments. They are often found near rivers, lakes, and swamps. Some species of crocodiles will even venture into brackish water, a mix of fresh and salt water.

What does a float of crocodiles eat?

Crocodiles have powerful jaws that can crush their prey with ease. They are carnivores and typically eat fish, reptiles, birds, and mammals. The size of their prey depends on the size of the crocodile. For example, a large saltwater crocodile can weigh over a ton and therefore needs to eat large animals, such as deer or buffalo. Smaller crocodiles will eat the smaller prey, such as rodents or lizards. A group of crocodiles will typically eat the same types of food.

What is the largest group of crocodiles?

What is the smallest group of crocodiles?

The smallest recorded group of crocodiles was two animals. This group was founded in 2006 in Gabon, Africa.

What is a group of baby crocodiles?

What is a group of alligators called?

A group of alligators is most commonly called a congregation but can also be referred to as a family. A critical difference between the two terms is that a congregation usually refers to a gathering of an assembled body- meaning that the alligators have come together for a specific purpose. In general, younger and smaller alligators will submit to the authority of the larger alligators in the group. In contrast, a family is typically used to refer to alligators that live together nearby and often have established social hierarchies.

Read more about the differences between an alligator and a crocodile

Other interesting facts about a group of crocodiles

They are also known to exhibit social behavior, such as cooperation and altruism. Altruism is a selfless act done for the benefit of another individual without any expectation of reward. Studies have shown that crocodiles are capable of altruistic behavior, such as helping injured or sick members of their group. They will also work together to protect their young from predators. This shows that crocodiles are capable of empathy and compassion for others.